Hollis Murphy has a plan—college, career, boyfriend, love, marriage, family. A predictable, normal life. She’s on track until an outside force causes her to crash and burn. They call it an accident, because that’s the only word they know to explain what happens to her. It helps everyone move on with their lives, except for Hollis. She holds on to the belief that she’s been targeted for a reason.

Risher Stevenson is intelligent, caring, sweet, and the hottest boy Hollis has ever laid eyes on. He fits perfectly into her original plan for a normal life. Everyone loves him.

Benton Daniels is intelligent, caring, sweet, and the bravest boy Hollis has ever met. He doesn’t fit into her life but gives it purpose and makes it extraordinary. Everyone hates him.

One is bullied. One is tormented. All are judged. How will it STOP?

“Things aren’t always black and white… There’s a lot of grey in the world.”

This is one of those books that was hard to read and is going to be even harder to review. Stop! is  a story about three college freshman. Hollis, Risher, and Benton. These three characters were so different but I adored all three of them equally (and no- there is no love triangle). I admired the strength they had.

Hollis is a girl who is hiding who she is behind a mask of makeup. She has seen how people look at her and treat her without it so now it’s her mask and she’s comfortable that way. She just wants to be normal and have a normal life.


When she meets Risher, the sweet and popular college guy, Hollis can’t believe that he’s giving her of all people attention. Risher could have any girl he wanted, but he chooses Hollis. He sees the beauty on the inside and the outside of her. Then there is Benton. A kid who’s lost in the world but finds friendship and acceptance with Hollis. I feel like I can’t say more about these characters or their stories. You need to read it for yourself and find out more.

I love Bailey’s writing style and storytelling abilities. I especially love that she is willing to tackle not so easy to write about topics. This book wasn’t as angsty as her Perfect series, but it had my emotions all over the place. I think I cried non-stop the entire last 10% of the book. I felt gutted by the events that took place. Thank goodness for the beauty of the epilogue. Things turned out just the way they were supposed to after all the tragedy and heartache. Stop! is definitely a book I would recommend- but only if you can handle some strong emotions and subject matter that’s not easy to read about. 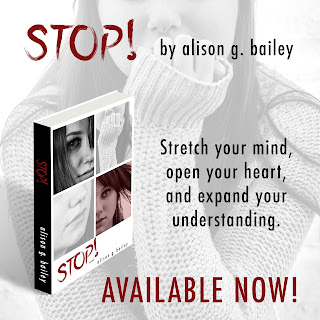 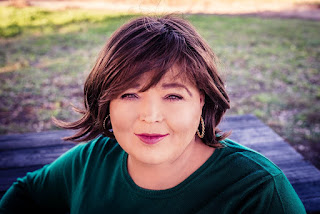 Alison was born and raised in Charleston, SC. She attended Winthrop University and graduated with a major in Theater. While at school Alison began writing one-act plays, which she later produced. Her debut novel, Present Perfect, landed on Amazon's Best Seller List and appeared on many "Best Reads of 2013" Book Blogs. The novel won Best Book at the 2014 Indie Romance Convention Awards. Her second novel, Past Imperfect, was published in February of 2014 and appeared on several best books of 2014 lists as well. Presently Perfect, the third and final book in The “Perfect” series was released in Dec 2014 to rave reviews. In March 2015 all the love, swoon, heat, and angst were combined into the Perfect Series Box Set.
Website http://alisongbailey.com/
Facebook https://www.facebook.com/AlisonGBaileyAuthor
Twitter https://twitter.com/AlisonGBailey1
Instagram http://instagram.com/alisongbailey/
Pinterest http://pinterest.com/alisongbailey/present-perfect-by-alison-g-bailey/
Goodreads http://www.goodreads.com/author/show/7032185.Alison_G_Bailey
Posted by Christy Baldwin at 4:57 AM