Bet the Farm by Staci Hart is LIVE!

Bet the Farm is LIVE and available from your favorite online book retailer! This heartfelt, flirty story of opposites attract from Staci Hart is just what you need. Happy reading! 💕

Olivia Brent has one summer to save the dairy farm she just inherited.

But there’s one problem, and it’s not her lactose intolerance.

The brooding farmhand has inherited exactly fifty percent of Brent Farm, and he’s so convinced the city girl can’t work the land, he bets she can’t save it in a summer.

Determined to prove him wrong, Olivia accepts what might be the dumbest wager of her life.

His strategy to win seems simple: follow her around, shirtlessly distracting her between bouts of relentless taunting. And it’s effective—if his dark eyes and rare smiles aren’t enough to sidetrack her, the sweaty, rolling topography of the manbeast’s body would do the trick.

What they don’t know: they’ll have to weather more than each other.

Mysterious circumstances throw the farm into disarray, and with the dairy farm in danger, Olivia and Jake have to work together. But when they do, there’s more to fear than either of them imagined.

Because now their hearts are on the line, and the farm won’t be the only casualty if they fail. 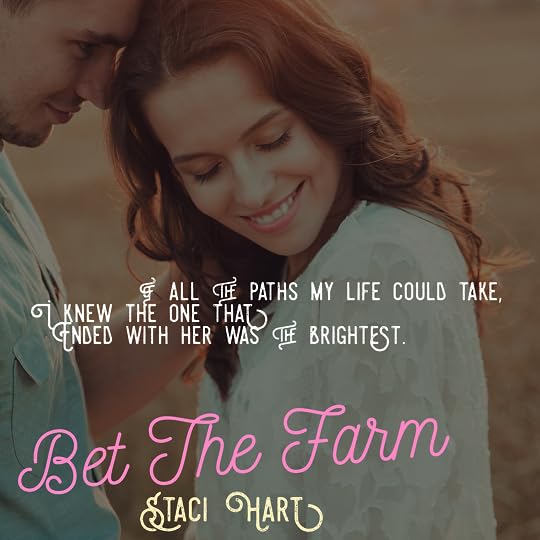 I love Staci Hart's rom coms and this one was no exception. Bet the Farm had all the humor I wanted, but also had a lot of emotion and a ton of heart.

Olivia Brent is back at the dairy farm she grew up on, but it's not the same as it once was. Her grandfather passed away and left her half the farm. The only problem, it needs a lot of help or it will go under. Well, that and the other half was left to Jake. Jake who doesn't take any of Olivia's idea's seriously. These two butt heads so much trying to get this farm together and it was a joy to read.

There isn't much I love more in romance than the grumpy hero/sunshine heroine and that is exactly what you get with Jake and Olivia. Jake could be a jerk at times and he was a little brass, but he had his reasons. He truly loved the farm and needed it to do well. And as much as he denied his feelings for Livi at times, it was obvious how much he cared for her. I loved that Livi was optimistic and always trying to better the farm and cheer Jake up, even if it did get her in trouble sometimes.


"Do me a favor and stay out of trouble," he called over his shoulder.


This couple had so much chemistry and complimented each other perfectly. I enjoyed reading about their romance so much. There was a suspense element to the farm that was a bit predictable, but I really liked how it was resolved.

If you're looking for an emotional and fun book that will make you laugh and give you feels, pick up Bet the Farm!

Staci has been a lot of things up to this point in her life -- a graphic designer, an entrepreneur, a seamstress, a clothing and handbag designer, a waitress. Can't forget that. She's also been a mom, with three little girls who are sure to grow up to break a number of hearts. She's been a wife, though she's certainly not the cleanest, or the best cook. She's also super, duper fun at a party, especially if she's been drinking whiskey. When she's not writing, she's reading, sleeping, gaming, or designing graphics.

Kirby Litman has been abandoned by everyone in his life at one time or another since childhood. And when his cheating ex drops their baby girl in his lap and leaves the country, he vows he won’t abandon his daughter, Celeste, like he was. Between parenting, hockey, and mentoring three brand-new young players, he doesn’t have much time for himself. Though, when Jaylin Raventorn crosses his path again, he wants to stop the clock for her

Jaylin has had her eye on Kirby from the first moment they met over a year ago, but his surprise fatherhood threw their plans into the penalty box. Now that he’s back in play—and with a cute new teammate to boot—Jaylin is as eager as Kirby to pick up where they left off.

But will the love-’em-and-leave-’em lawyer be able to let go of her fears to build a future with the man who’s always been left behind? Or will the hard hit from their pasts be too much for them to overcome? 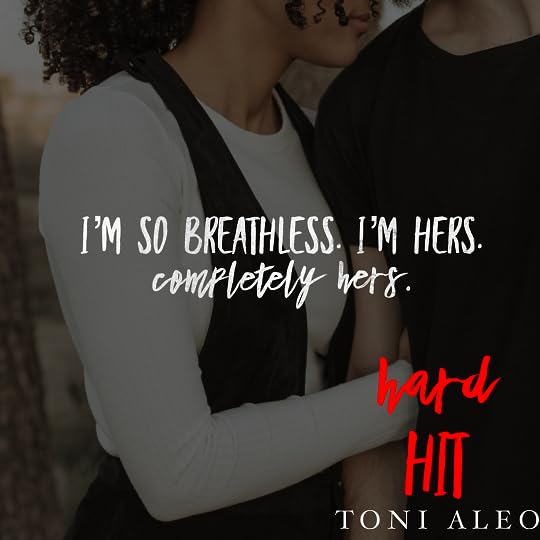 I love Toni Aleo's sports romances so much and I was happy to get back into the world of the IceCats. Kirby and Jaylin's story was a beautiful second chance romance and of course I loved the single dad aspect.

Kirby and Jaylin never truly got the chance to try to be together, but they felt a connection. Once Kirby found out his ex-girlfriend was pregnant, he needed to focus on that and it stalled anything happing with Jaylin. Now, a year later, Kirby finds himself running into Jaylin with his daughter Celeste, who he has full time. I hoped so much that this second chance at love would work out for them.

Kirby is one of Toni's sweetest heroes. He has the biggest heart and is such an incredible father. I adored him and I especially loved seeing how he was with Celeste. Jaylin is a strong heroine who hasn't been in a serious relationship, but she's willing to try with Kirby. Though these two had some obstacles and things to work through, they were amazing together. They complimented each other so well and I loved them together.

Another fantastic thing about this book was getting to see more Nico and Aviva! Kirby is Nico's teammate and best friend, and Jaylin is Aviva's long time bestie. I highly recommend this book/series if you are a fan of sports romance. This one was sweet, swoony, and steamy!

My name is Toni Aleo and I’m a total dork.
I am a wife, mother of two and a bulldog, and also a hopeless romantic.
I am the biggest Shea Weber fan ever, and can be found during hockey season with my nose pressed against the Bridgestone Arena’s glass, watching my Nashville Predators play!
When my nose isn’t pressed against the glass, I enjoy going to my husband and son’s hockey games, my daughter’s dance competition, hanging with my best friends, taking pictures, scrapbooking, and reading the latest romance novel.
I have a slight Disney and Harry Potter obsession, I love things that sparkle, I love the color pink, I might have been a Disney Princess in a past life… probably Belle.
… and did I mention I love hockey?