Review: Washed Up by Kandi Steiner 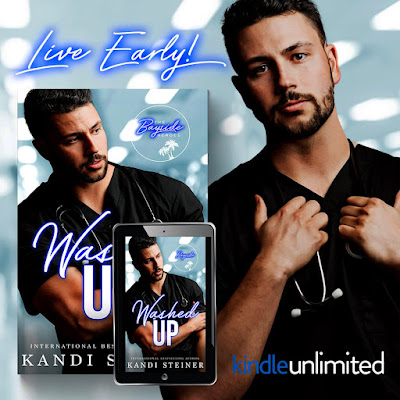 Read now in Kindle Unlimited!
https://amzn.to/3DrLpnQ
It was just another day in the Emergency Department -- until she was wheeled in through the doors.Amanda Parks, my childhood best friend's mom who I may or may not have secretly kissed before leaving for college.I haven't seen her in over a decade, and in so many ways, she hasn't changed. Same killer curves.Same hypnotizing eyes.Same reaction from my heart when I see her.But something new?There isn't a ring on her finger anymore...And I'm much more of a man than I was at eighteen.

I love a good age gap romance and it's been some time since I've read one with an older heroine/younger hero. This was a bit different from what Kandi normally writes, but it was still so good. I enjoyed it so much!

Amanda is in the process of getting divorced and restarting her life. At forty seven, she has an adult son, a terrible soon to be ex-husband, and was a stay at home wife/mother. Her first step is to go back to school and that's what she's doing.

Greg is an anesthesiologist at the hospital. Med school was a lot of work, but he's now back in his hometown/local high school and has been for two years. He's been here for 2 years and even though he has a great routine, it doesn't feel like home quite yet.

Everything is routine for Greg until he sees her. His biggest crush when he was a teenager, his high school best friend's mom, Amanda. What I loved most about this book is the friendship that Greg and Amanda developed. Before anything happened between them, you could just tell they were becoming each others best friends and it was so great.

Also, I loved watching Amanda change and grow. Even though she was older than Greg, she had a lot of growing to do and a lot of life to discover and live. These two were perfect together and the ending made me so happy! Another great Kandi Steiner read.

Posted by Christy Baldwin at 4:51 PM No comments:

Stefan Dalca is beautiful, brooding, and bossy. He’s also public enemy number one in this small town, with a murky past that’s hard to overlook. And I just agreed to three fake dates with him.

I may be a renowned veterinarian, but when I find myself in a sticky situation, Stefan is my last hope. I need his help to save a sick foal and what he wants in return is me.

Our time together starts out as a simple transaction, but the more time I spend with him, the more I wonder if he’s not quite the villain they’ve made him out to be. With every intimate conversation and lingering look, the tension between us builds. I’ve been drawn to Stefan since the first day I laid eyes on him. And now he’s downright irresistible.

I know sleeping with the enemy is playing with fire. But like a moth to a flame, I’m attracted to the mysterious man in a way I can’t explain—in a way those closest to me wouldn’t approve of or understand.

And the more he softens for me, the harder I fall.

But as his mysteries unravel, so do hidden truths. Truths that are bound to leave someone burned.

I just didn’t expect that someone to be me.
The Front Runner by Elsie Silver is available now for only $2.99 or you can read for FREE in KindleUnlimited! Get it today:  https://geni.us/thefrontrunner
Christy's Review: 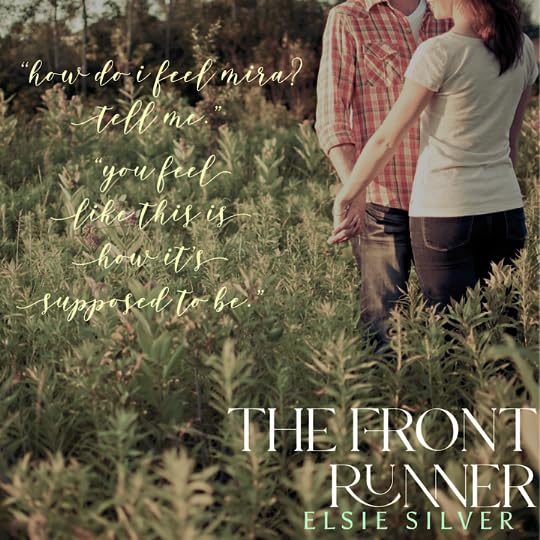 I read my first Elsie Silver book this year and I enjoyed it a lot, but I loved this one even more! The Front Runner had the perfect mix of angst, steam, emotion, and fun! Stefan and Mira were absolutely fantastic and complimented each other so well.


"I'm not the villain you think I am."
"Or maybe you're exactly who I think  you are and I like it."

If you’ve read ‘Photo Finish’, you probably don’t think too highly of Stefan Dalca. I know I didn’t right away. He’s an enemy/rival Gold Rush Ranch, and Mira’s best friend runs that ranch. Mira is a veterinarian and runs between the ranches taking care of all the horses. When she needs Stefan’s help to save a baby foal, she sees a totally different side of him.

Misunderstood/broody heroes… they’re one of my favorite things in a romance and Stefan is exactly that. How he appears to be is not how he is at all. I adored him. Watching him with Loki warmed my heart, and I loved seeing him with his sister. I especially loved watching him thaw out Mira little by little. It took some time, but he was persistent and eventually, she couldn’t resist him.

This is the third book in Elsie Silver’s ‘Gold Rush Ranch’ but can definitely be read as a stand alone. I loved being back in this world and I’m glad I’d read the previous one before this because it was nice knowing a lot of the secondary characters and their story. This is lovely forbidden-ish romance that I couldn’t get enough of!


"I would walk through fire for you any day. Over and over again.”

Posted by Christy Baldwin at 12:18 AM No comments: