New release review: With You Forever by Chloe Liese

Cozy up for a heartfelt, humorous, sizzling slow-burn in this marriage of convenience romance about finding love—and home—in the most unlikely of places.

Axel
Rooney Sullivan is sunshine incarnate. Warm, bright, always smiling, she’s everything I’m not and the last person I have any business desiring. Desperate to hide a hopeless attraction, I’ve done everything possible to keep my distance...until a charades game gone wrong brought that to a grinding halt.

Since then, steering clear of Rooney has been impossible. In a matter of months, she’s kissed me speechless, commandeered my art career, and infiltrated not only my dreams but my home. The woman who was once avoidable has become the last thing I needed: temptingly within reach.

Rooney
Axel Bergman is a gorgeous grump who doesn’t have the time of day for me. Thankfully, I’ve kept my crush under wraps...well, until I kissed him. Charades got away from me, okay? It was an accident! I haven’t seen him since, which is for the best. My life is a mess, and the last thing I need is to embarrass myself further with the man who avoids me like that’s his job rather than painting modern masterpieces.

With You Forever is a sunshine and grump, marriage of convenience romance about a shy artist on the autism spectrum*, and a smiley smartypants who has a chronic IBD. Complete with combustible cooking lessons, interfering family and friends, and a steamy slow burn, this standalone is the fourth in a series of novels about a Swedish-American family of five brothers, two sisters, and their wild adventures as they each find happily ever after.

*This is an #OwnVoices story for its portrayal of autism by an autistic author. 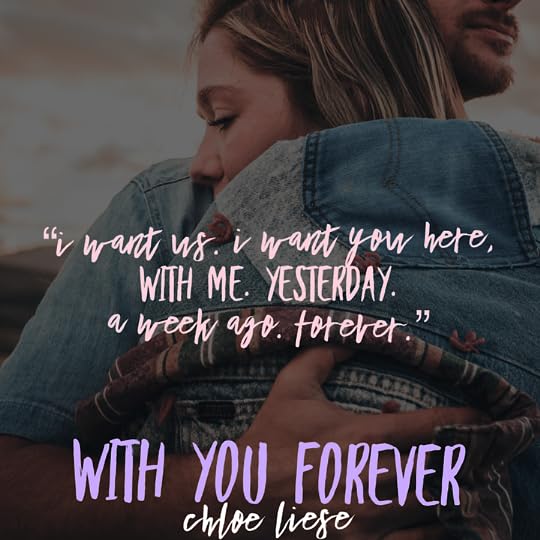 I love the Bergman siblings so much and I was so excited to start With You Forever. Axel and Rooney were so worth the wait! Grumpy sunshine and marriage of convince are two of my favorite troupes so when I saw both of those in this book…. eek! I adored it.

Rooney is having some health struggles and needs a bit of a break from school and life. Her best friend offers the families house for her to get some R&R and when she gets there (it’s supposed to be all hers) Axel is there. Axel definitely does not want a visitor, as he’s doing some work on the place. Because of that he needs a wife. It’s a long story, but to dip into his inheritance from his uncle he has to be married.

Rooney is willing to help out Axel, she needs a place to stay and it makes sense for them both. Rooney and Axel both have this attraction to one another, but at first they fight it. Axel is quiet, a bit shy, and appears to be a grump, where as Rooney brightens up any room she’s in. In this case, opposites really do attract.

One of my favorite things about this book was how soft Axel was for Rooney. When they started to truly know each other you just saw a different side of both of them and it was beautiful. And I also have to shout out that Chloe does an amazing job with being inclusive in her writing. One of my closest friends has the same chronic illness as Rooney and I’ve heard some of the same stories/struggles from her.

Honestly, there was so much to love about this book. Axel and Rooney were an unexpectedly great couple and watching them fall for one another and open up to each other was such a joy. I wanted this to be a five star read so badly, but there was something towards the end that really bummed me out… aside from that, I loved this one to pieces and highly recommend checking it out! 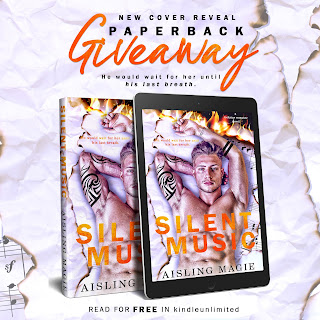 To win a paperback of SILENT MUSIC, enter on the original post on the author’s page @aislingmagie

And he refuses to let her go.

For nearly two years, Kai Eastwood has watched Phoenix Banks lost in a state of coma.

Singing the songs they wrote.

Remembering the moments they spent together.

Missing the kisses they shared.

But how long can hope be held when, with each new day, Phoenix slips farther away?

When the music fades,

And the silence invades,

Their song will begin.

Buy on Amazon or read for FREE with KU: https://amzn.to/3bmW1ZJ

Add to your TBR: http://bit.ly/2ZobAYC