5 stars to PRIDE AND PAPERCUTS by Stacy Hart!

The Austen series is coming to an end. The final book in the series is LIVE! I'm so excited to read Pride & Papercuts, a modern love story inspired by Jane Austen's Pride & Prejudice! Have you grabbed your copy yet?

Hate is a strong word.

Depending on the company, loathe is a good substitute. Abhor might be a little fancy, but it gets the job done. But the word that really sums up how I feel about Liam Darcy is, without question, hate.

He doesn’t seem to think much of me either. The second he lays his fault-seeking eyes on me, he sets out to oppose me. Everything about him is imposing, as if he consumes the nearby air to power the rise and fall of his broad chest, and it’s clear he resents my presence on his advertising team. Every idea I have is shot down. Every olive branch I offer is set on fire by nothing more than the blistering coals he calls eyes.

In return, I light him up with my words.

It’s not as if he can dismiss me, since I work for his client, Wasted Words. Instead, he’s forced to tolerate me, which seems the closest we’ll ever be to friends. Fine by me.

I can be civil and still hate Liam Darcy.

But if there’s more to him than his exterior shows, I won’t be able to hate him at all. I might stumble over that line between love and hate and fall right into his arms. 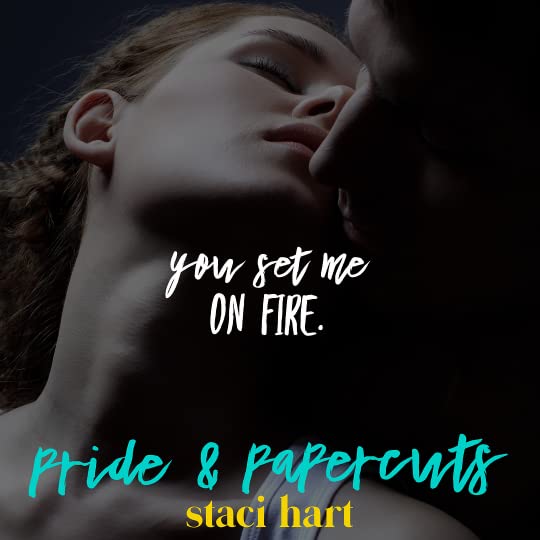 This was the thing I’d feared, the redemption I’d craved. Because now that I knew her power, I would be a slave to her. And I’d be shackled willingly.


Pride and Papercuts is not only an amazing enemies to lovers story, it's the ultimate Pride and Prejudice retelling. Seriously friends, this one is epic. I'll be the first to admit, I like Pride and Prejudice but I'm not a super fan or anything. Controversial opinion here I'm sure, but I loved this story more than the original. There was something so special about it and I couldn't get enough of Laney Bennet and Liam Darcy.

Laney Bennet and her brother Jett are the only two Bennet's that don't work in the family business. They work at Wasted Words- a bookstore/bar thats undergoing a new marketing campaign. Since Laney does all their social media and current marketing, she's heavily involved with the new launch. The company working with them is Liam and his sister Gerogie's.

Liam and Laney butt heads from the first moment they meet. They don't work well together at first, but they challenge each other in the best way. Still, they're openly hostile at times. Underneath the hostility, there is so much banter and tension. And you just know, when they finally do something about it it's going to be so explosive, so passionate... and it is.

Gahhh I loved this couple so much. Liam Darcy was the greatest broody hero. He's got his issues and he's the way he is for a reason, but he needs someone exactly like Laney in his life. Someone that challenges him and makes him see things differently. Laney was such a wonderful heroine. She's strong, stands up for what she believes in and is completely loyal. They make such a great pair.


“I’ll forgive you on one condition.” “Anything.” “Kiss me.” Smiling, he leaned in and said against my lips, “Always.” One word, and I was his. One kiss, and I was gone.


Another thing I truly loved about this book was not only did it have great side characters, there was a whole other side romance going on between Jett and Georgie. It was fun watching them fall in love and I enjoyed that part of the book so much. I also loved the relationship Laney had with Jett and Liam with Georgie. Strong sibling bonds are the best.

This was one of the most beautifully written, swoony, and sweep you off your feet romances I've read in 2020. It was such a glorious slow burn and I adored every page. Pride and Papercuts can be read as a stand alone, but if you've read Hart's other books (the Bennet Brothers, specifically) you might even love it more. Lovers of modern day retellings, forbidden romance, slow burn, and enemies to lovers- YOU NEED TO READ THIS!

Posted by Christy Baldwin at 8:49 AM