"Sublimely creepy with a true Hoover pulse. I've been waiting on a thriller like this for years." Tarryn Fisher, New York Times bestselling author

Lowen Ashleigh is a struggling writer on the brink of financial ruin when she accepts the job offer of a lifetime. Jeremy Crawford, husband of bestselling author Verity Crawford, has hired Lowen to complete the remaining books in a successful series his injured wife is unable to finish.


Lowen arrives at the Crawford home, ready to sort through years of Verity's notes and outlines, hoping to find enough material to get her started. What Lowen doesn't expect to uncover in the chaotic office is an unfinished autobiography Verity likely didn't intend for anyone to read. Page after page of bone-chilling admissions, including Verity's recollection of the night their family was forever altered.


Lowen decides to keep the manuscript hidden from Jeremy, knowing its contents would devastate the already grieving father. But as Lowen's feelings for Jeremy begin to intensify, she recognizes all the ways she could benefit if he were to read his wife's words. After all, no matter how devoted Jeremy is to his injured wife, a truth this horrifying would make it impossible for him to continue to love her.

Download your copy today or read FREE in Kindle Unlimited! 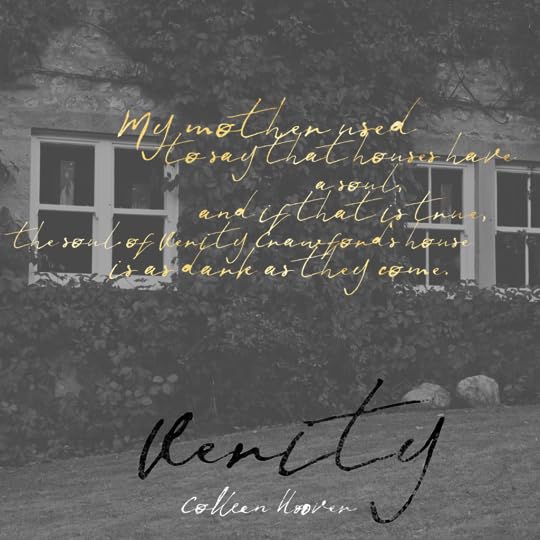 Have you ever finished a book and thought… WTF did I just read? Verity is one of those books that will do that to you. Word to the wise for CoHo fans: this is not your typical book from Colleen Hoover. It’s amazingly written and it’s a completely captivating read, but it’s so different from anything she’s ever put out before.

“Some families are lucky enough to never experience a single tragedy. But then there are those families that seem to have tragedies waiting on the back burner. What can go wrong, goes wrong. And then gets worse.”


Verity is a complex story about an author who is ghost writing a series for Verity Crawford, an author who is injured in a way she can’t write right now- maybe ever. Her husband, Jeremy, commissions Lowen to do this work. Lowen goes to the Crawford’s house to do some research but that house and that family is more than she ever expected. While searching through old paperwork pertaining to the series Verity has written, she finds a manuscript of a truly messed up autobiography that changes her life and the life of the Crawford family forever.

The word I would use to describe this book is disturbing. I was seriously disturbed the whole time I read. It wasn’t too spooky for me, but it was thrilling and horrifying at times. The writing was out of this world and the story messed with my mind. I’m not sure if I loved it, hated it, liked the characters or hated them. It’s a story that’s not always likable, but dang it was good. It was enthralling and made me think. That ending messed with my mind so bad, I don’t even know how to feel.

If you’re a fan of psychological thrillers with romance thrown in and don’t mind a book that’s disturbing and thrilling because it’s also brilliant, check out Verity. I’m glad I went outside the box with this one and read it!

“What are you wearing?” Corey is staring down at my shirt, perplexed, just now noticing it despite having spent the last fifteen minutes with me.

I look down at my oversized shirt. For a moment, I forgot how ridiculous I look. “I spilled coffee on my other shirt this morning and had to change.”

“Whose shirt is that?”

I shrug. “Probably yours. It was in my closet.”

“You left your house in that? There wasn’t something else you could have worn?”

“It doesn’t look high fashion?” I’m being sarcastic, but he doesn’t catch it.

Such an ass. But he’s good in bed, like most assholes.

I’m actually relieved when the conference room door opens and a woman walks in. She’s followed, almost comically, by an older man walking so closely behind her, he bumps into the back of her when she stops.

“Goddammit, Barron,” I hear her mumble.

I almost smile at the idea of Goddammit Barron actually being his name.

Jeremy enters last. He gives me a small nod that goes unnoticed by everyone else.

The woman is dressed more appropriately than I am on my best day, with short black hair and lipstick so red, it’s a little jarring at nine thirty in the morning. She seems to be the one in charge as she reaches for Corey’s hand, and then mine, while Goddammit Barron looks on. “Amanda Thomas,” she says. “I’m an editor with Pantem Press. This is Barron Stephens, our lawyer, and Jeremy Crawford, our client.”

Jeremy and I shake hands, and he does a good job of pretending we didn’t share an extremely bizarre morning. He quietly takes the seat across from me. I try not to look at him, but it’s the only place my eyes seem to want to travel. I have no idea why I’m more curious about him than I am about this meeting.

Amanda pulls folders out of her briefcase and slides them in front of Corey and me.

“Thank you for meeting with us,” she says. “We don’t want to waste your time, so I’ll cut right to the chase. One of our authors is unable to fulfill a contract due to medical reasons, and we’re in search of a writer with experience in the same genre who may be interested in completing the three remaining books in her series.”

I glance at Jeremy, but his stoic expression doesn’t hint at his role in this meeting.

“Who is the author?” Corey asks.

“We’re happy to go over the details and terms with you, but we do ask that you sign the non-disclosure agreement. We would like to keep our author’s current situation out of the media.”

I acquiesce, but I say nothing as we both look over the forms and then sign them. Corey slides them back to Amanda.

“Her name is Verity Crawford,” she says. “I’m sure you’re familiar with her work.”

Corey stiffens as soon as they mention Verity’s name. Of course we’re familiar with her work. Everyone is. I hazard a glance in Jeremy’s direction. Is Verity his wife? They share a last name. He said downstairs that his wife is a writer. But why would he be in a meeting about her? A meeting she isn’t even here for?

“Verity has a very successful series we would hate to see go unfinished,” Amanda continues. “Our goal is to bring in a writer who is willing to step in, finish the series, complete the book tours, press releases, and whatever else is normally required of Verity. We plan to put out a press release introducing the new co-writer while also preserving as much of Verity’s privacy as possible.”

About Colleen Hoover
Colleen Hoover is the #1 New York Times and International bestselling author of thirteen novels and multiple novellas. She lives in Texas with her husband and their three boys. She is the founder of The Bookworm Box, a non-profit book subscription service and bookstore in Sulphur Springs, Texas.

Posted by Christy Baldwin at 11:44 AM