Fans of Sarah Dessen, Stephanie Perkins, and Jenny Han will delight as the fireworks spark and the secrets fly in this delicious summer romance from a New York Times and USA Today bestselling author.

When Jade decided to spend the summer with her aunt in California, she thought she knew what she was getting into. But nothing could have prepared her for Quentin. Jade hasn't been in suburbia long and even she knows her annoying (and annoyingly cute) next-door neighbor spells T-R-O-U-B-L-E.

And when Quentin learns Jade plans to spend her first American summer hiding out reading books, he refuses to be ignored. Sneaking out, staying up, and even a midnight swim, Quentin is determined to give Jade days--and nights--worth remembering.

But despite their storybook-perfect romance, every time Jade moves closer, Quentin pulls away. And when rumors of a jilted ex-girlfriend come to light, Jade knows Quentin is hiding a secret--and she's determined to find out what it is. 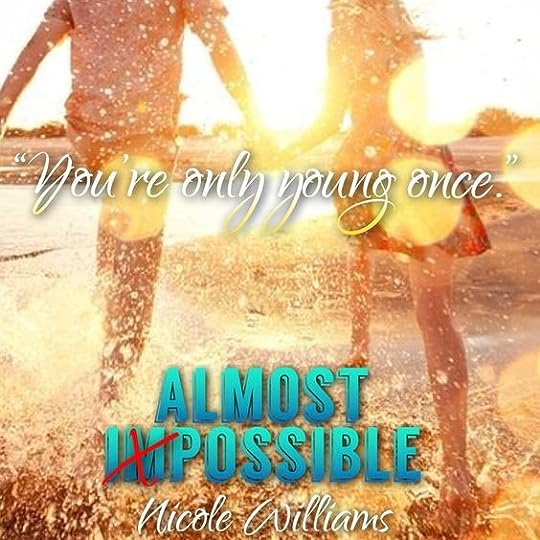 Jade is a teenager, but at seventeen, she’s never lived the ‘normal life’ of a teen. Her mom is a popular musician and she’s spent all her youth traveling around. She’s seen a lot, but never felt rooted anywhere. She decides to spend the summer before her senior year with her aunt and have a real teenage experience. She gets a job, she makes a friend, she meets a boy….

Jade and Quentin didn’t expect to hit it off the way they did, but they had chemistry straight away. I liked both of the main characters a lot. I thought Jade was great, and Quentin was a stand-up guy. If only it wasn’t so predictable for me personally I think this book could have been a huge win for me.

Almost Impossible is a sweet summer romance.I enjoyed reading this book, though I wished I would have not guessed the secret so early on in the book. It felt like I knew exactly what was going on and just waiting on the other shoe to drop. Also, I wish there were a few more chapters at the end, or an epilogue. For me, it felt like it ended a little too quickly after things were resolved. I love Nicole William’s writing and overall this was a quick, fun, and entertaining read for me!

Nicole Williams is the New York Times and USA TODAY bestselling author of contemporary and young adult romance, including the Crash and Lost & Found series. Her books have been published by HarperTeen and Simon & Schuster in both domestic and foreign markets, while she continues to self-publish additional titles. She is working on a new YA series with Crown Books (a division of Random House) as well. She loves romance, from the sweet to the steamy, and writes stories about characters in search of their happily even after. She grew up surrounded by books and plans on writing until the day she dies, even if it’s just for her own personal enjoyment. She still buys paperbacks because she’s all nostalgic like that, but her kindle never goes neglected for too long. When not writing, she spends her time with her husband and daughter, and whatever time’s left over she’s forced to fit too many hobbies into too little time.

Nicole is represented by Jane Dystel, of Dystel and Goderich Literary Agency.

Posted by Christy Baldwin at 8:30 AM