About SIN & SUFFER
"Some say the past is in the past. That vengeance will hurt both innocent and guilty. I never believed those lies. Once my lust for revenge is sated, I'll say goodbye to hatred. I'll find a new beginning."
She came from a past Arthur "Kill" Killian never forgot. She made him sin and made him suffer. She tugged him from the shadows and showed him he wasn't as dead as he thought. And with her resurrection came betrayal, deceit, and war.But then they took her. Stole her. Imprisoned her.Now Kill's carefully laid plans for vengeance are complete. He craves action, retribution-the blood of his enemies. War has begun. War is all they'll know until they've paid their penance. He will get her back-and rewrite their destiny . . . 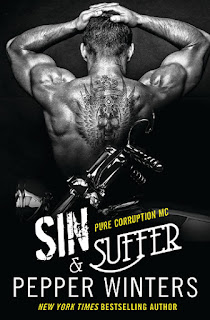 Sin & Suffer is the highly anticipated sequel to Ruin & Rule. Let me tell you, after I read Ruin & Rule I was DYING to see what happened next! Pepper Winters took us on one wild ride and left us with a shocker of an ending! Cleo and Art are two characters that are damaged, yet strong. With all the twists and turns, I’m so happy about where the story took us.

I don’t want to get spoiler-y and go into the story, but we all know how important revenge is to Kill. That is a huge part of the story. We also get tons of growth between Cleo and Kill. Their relationship really flourishes in this story, even with all going on. I loved this one lots, but for me, it missed the 5 star mark just a bit. It felt a little too long at times, and most of the time it kept my interest, but other times I skimmed a bit.

Pepper Winters doesn’t give us a traditional MC book with this series. Nothing is traditional about her stories and I love her for that. Sin & Suffer was suspenseful, sexy, dark, gritty and unique. It was also an all consuming love story with vengeance and secrets. I love books that keep me on the edge of my seat, keep me thinking and keep me guessing. Sin & Suffer did that. I would recommend this one to all fans of darker romances! 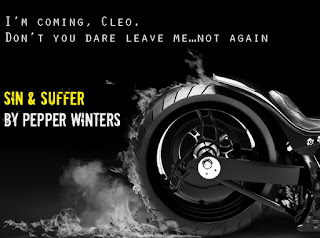 About Pepper Winters
Pepper Winters is a New York Times and USA Todayinternational bestseller. She loves dark romance, star-crossed lovers, as well as the forbidden and taboo. She strives to write a story that makes readers crave what they shouldn't, and delivers complex plots and unforgettable characters that keep readers talking long after the last page is turned.On a personal note she loves to travel, has an addiction to creme brulee, and is married to an incredible Canadian who puts up with her endless work hours and accompanies her on signings. She's also a firm believer that the impossible can become possible.
http://pepperwinters.com/
https://www.facebook.com/Pepper-Winters-539976006062848/
https://twitter.com/pepperwinters
https://www.pinterest.com/pepperwinters/ 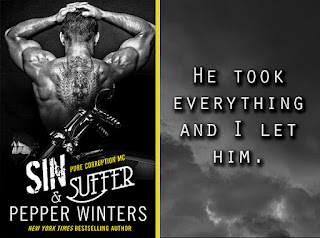 Click on the link below for a chance to win a Sin & Suffer Paperback!