Synopsis
One night changed my life—one that I barely remember.

When I close my eyes, my mind paints a picture of his smile and shades the contours of his hands, the deep scar around his bicep.

I'm an artist, yet my hands are unsteady. With his presence, he has unknowingly broken that something inside of me that makes me who I am.

Being around him is like standing in a rainstorm. First the drops tickle my skin, and then they coat me, refusing to be ignored. Finally, they soak into me, reaching parts of me I don’t think anyone has ever touched.

When dreams turn into reality, will the picture in my mind transfer to paper? 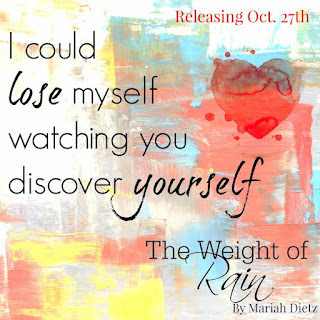 “Why do you pretend that I don’t mean anything to you when clearly I do?”

My charcoal presses hard against the paper as my neck snaps up. He’s fully dressed, his usual baseball hat still on, flipped backward, and wearing a flannel shirt with the sleeves rolled to his elbows. Flannel is growing on me, but I won’t tell him that. His face shows no signs of humor or teasing. If anything, he looks almost pained.

“Did you just get home?”

“Why did you pretend you wanted to know me? Why not just call it what it was?” His eyes narrow as his chin drops.

“Have you been drinking?” I know the answer before I ask the question. I can smell it.

My heart races with too many possibilities and hopes, and not enough validation.

“You spend so much time trying to convince yourself that what happened that night wasn’t real.”

“You weren’t drunk. I wouldn’t have slept with you if you were drunk! I don’t do shit like that. It’s disgusting!”

“I don’t remember large parts of that night.”

“You remember more of that night than you’re willing to admit.” His eyes land on my drawing where he studies the image for several long seconds. I should have covered it as soon as I realized he was here, but it was too late from the beginning. It’s of him—of course it’s of him. And to make matters worse, he’s shirtless. The scars he mentioned me knowing about are there, as well as the few tattoos most of the world is deprived of seeing. “Obviously you remember.”

His words make my cheeks burn with embarrassment. He’s right, but hearing that he’s aware of this fact is both strangely relieving and move-to-Australia-tomorrow worthy. “You left an impression,” I admit before moving my attention so I don’t have to see his reaction.

“Lo, I haven’t been able to forget that night either. I think about it all. The. Damn. Time.” His words are punctuated, driving his message much further than just my thoughts. “I spent weeks trying to figure out who you were.” I feel slightly guilty that his admission makes me so happy. For so long I have thought he avoided me, lied about his name and identity so that I wouldn’t find out who he truly was.

“Why did we wait so long to be honest with each other?”

His breath is a snicker. “We’re only admitting a fraction of anything.”

His words run through my head, lacing into several variations of what he actually means, still, I nod. “This conversation needs to happen. We need to figure shit out because I’m tired of trying to avoid you, and I’m really tired of you ignoring me.”

“Aren’t we kind of doing that now?”

He shakes his head as he closes the distance between us, then grips the table with his left hand and bends so his face is level with mine. “If I stay in here any longer I’m going to do something that would probably make me deserve getting slapped, so I am going to say this and then leave.” He pauses. I can smell the scent of beer and peppermint on his breath, along with the warmth of his skin as his shoulders roll forward. His eyes are wide and bright, demanding me to pay close attention to his words. “I know you’re tough. I know you can draw better than any damn person I’ve ever met in my life and most likely ever will. I know you love Mercedes and would never risk changing that relationship. But we like each other, and I don’t know what in the hell that means exactly, but I know I want to find out. The question you need to ask yourself is, do you?”

His throat moves, swallowing words we both know he’s fighting with. Ones that would make things both better and worse. He reaches forward, his chest grazing my shoulder. I hate that I don’t want to move. That I want to absorb the feel of his warmth and convince him to admit truths we both know and bury on a daily basis in a sea of general politeness and attempts to avoid one another. But the truths are laid open with the innuendos, silent stares, and capitalized when we go out of the way to cross the other’s path. He has become an exhausting and thrilling addiction that I don’t know how to consider stopping or even changing at this point.

A long breath runs through my nose as his dark eyes meet mine, exposing he’s fighting his own battle: silently pleading with me to bring things up by making a cutting remark or joke about our night. I know he wants it because it’s the only way we can both talk about it and relive it. It’s apparent by the way his jaw locks and his eyes waver from mine that he also doesn’t want me to respond. He’s waiting for me to consider his words and come back. His arm flexes as he holds the table even tighter. Then he stands and stalks out of the room, leaving my heart racing.

Mariah Dietz lives in Eastern Washington with her husband and two sons that are the axis of her crazy and wonderful world.

Mariah grew up in a tiny town outside of Portland, Oregon where she spent the majority of her time immersed in the pages of books that she both read and created.

She has a love for all things that include her sons, good coffee, books, travel, and dark chocolate. She also has a deep passion for the stories she writes, and hopes readers enjoy the journeys she takes them on, as much as she loves creating them.

Posted by Christy Baldwin at 8:10 AM

Email ThisBlogThis!Share to TwitterShare to FacebookShare to Pinterest
Labels: Dietz, Release Day, The Weight of Rain