One week. No future. No past. No more.
Alexandria Collins has one week to live carefree—no ghosts of her past or pressures of her future haunting her. Reinventing herself as "Charli," she is knocked off her feet by a sexy, mysterious man who brings her pleasure like she never imagined.  With her heart at stake, she forgets that decisions made in the dark of night reappear in the bright light of day.

"Some of my tastes are unique. They aren’t for everyone. I understand that.”

Lennox "Nox" Demetri is wealthy, confident, and decisive—he knows what he wants. From the first time he sees Charli at an exclusive resort, he knows he wants her. Although he is usually the one to make the rules, together they agree on one:

One week. No more.

When betrayal comes from those closest to Alexandria, she must decide how far she is willing to go to survive. Choices are not always easy, especially when they involve the heart, body, and soul. After all, Infidelity is a business, and some rules are meant to be broken.

"Is it really cheating if you're doing it to yourself?"

From New York Times and USA Today bestselling author Aleatha Romig comes a sexy, new dominant hero who knows what he wants, and a strong-willed heroine who has plans of her own. With classic Aleatha Romig twists, turns, deceptions, and devotions, this new epic dark romance will have readers swooning one minute and screaming the next. Have you been Aleatha'd?

BETRAYAL is a full-length novel and the first of five in the INFIDELITY series.

Betrayal by Aleatha Romig
My rating: 5 of 5 stars
5 stars! 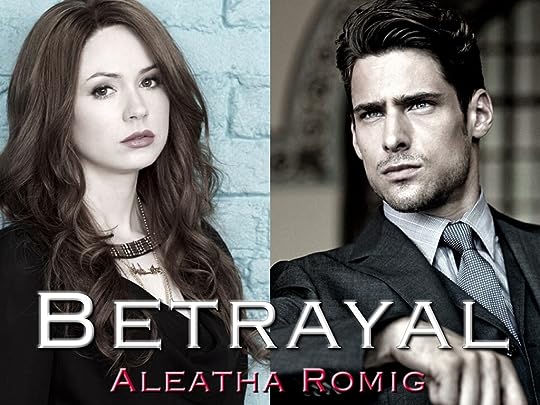 Aleatha Romig wrote one of my favorite series (The Consequences series) so even though I had no idea what to expect when starting Betrayal I expected greatness. She delivered. Betrayal is a fantastic start to her Infidelity series (don’t let the title fool you, there is no cheating in this one ;) ).

Alex Collins is on a one week vacation from her life. After just graduating college and getting ready to start law school, she needs that break. She and her best friend plan to just hang out and relax for a week. Then she meets Nox. Nox is mysterious, he’s handsome, confident and take charge. He knows what he wants and he wants her. They decide on some rules. One week. No details of real life. And it works. Though after that week, Alex can’t deny that she wants more. Alas, it’s back to the real world for her. Which unfortunately means back to her home for the first time in years. 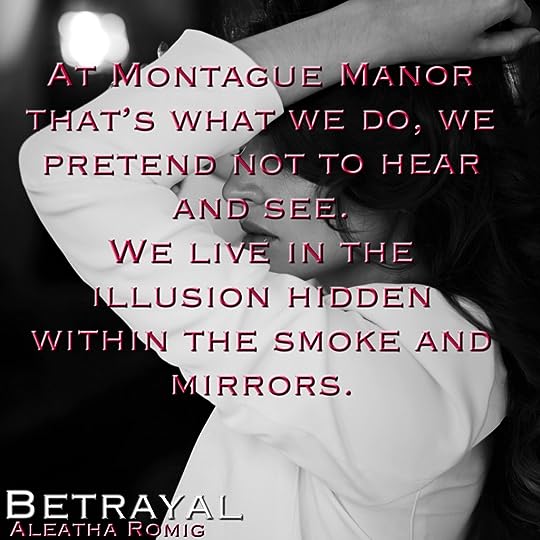 There is a lot that goes on at the Montague Manor. This is where the true betrayal begins. A weaker person than Alex would have been taken down by what happens to her, but let me tell you a little something about Alex. She is strong. She is also determined. She’s willing to do whatever it takes to live her life the way she wants and I love that she doesn’t just give in to what others what her to do. She’s a fighter.

Alex’s story jumps from past (just 6 weeks or so) to present. The past is her one week with Nox, her present is the now. Every time I would get into a past chapter, I didn’t want it to end. And every time I would get into a present chapter, I had to know what happened next. Although I did love seeing what was going on in the present, I have to say Alex’s time with Nox was my favorite to read about. 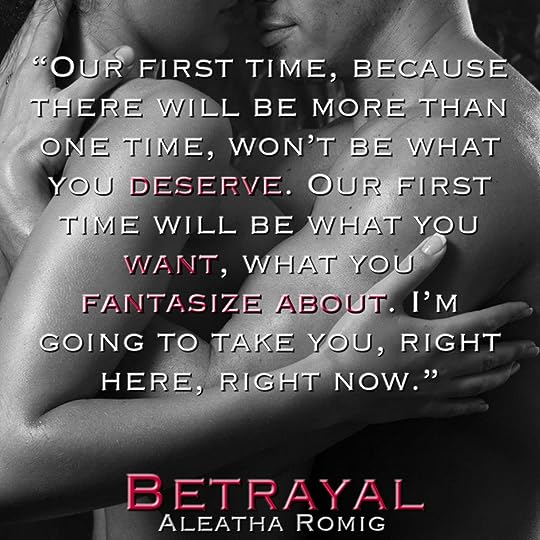 When I wasn’t with him, I wondered what it would be like to have someone like Nox in my life- my real life.
Could Alex do it? I didn’t know the answer.


The last chapter or so definitely had that jaw dropping moment. And then it ended. I wouldn’t say the cliffhanger was huge, but it has me craving more of this story! I can’t wait to read more about Alex and find out more about Nox.

Betrayal is not as dark or suspenseful as some of Romig's other books, but it still has that unique style and of course there were some twists along the way. It was addictive and once I started, I didn’t want to put it down. I absolutely love this woman’s writing and non-conventual stories. I think the direction this story took was fantastic. I’m not sure how I’m going to wait for January for the next installment. A great start to a potentially epic series! 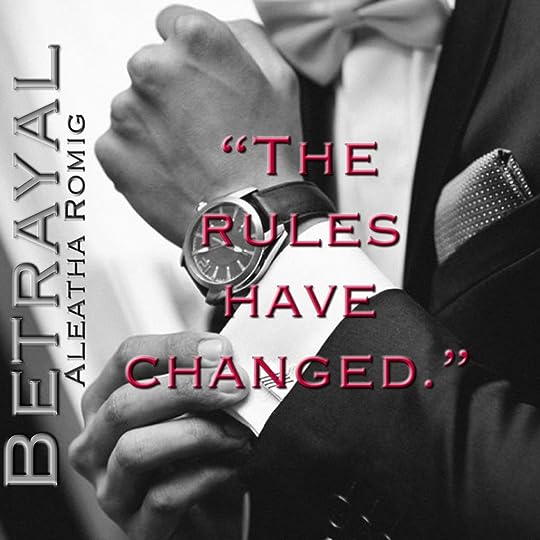 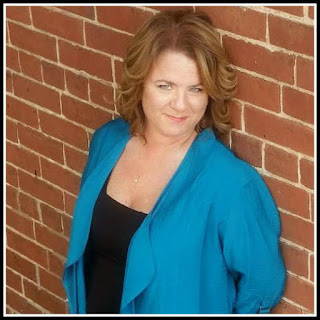 Aleatha Romig is a New York Times and USA Today bestselling author who lives in Indiana. She grew up in Mishawaka, graduated from Indiana University, and is currently living south of Indianapolis. Aleatha has raised three children with her high school sweetheart and husband of nearly thirty years. Before she became a full-time author, she worked days as a dental hygienist and spent her nights writing. Now, when she's not imagining mind-blowing twists and turns, she likes to spend her time  with her family and friends. Her other pastimes include reading and creating heroes/anti-heroes who haunt your dreams!
Aleatha released her first novel, CONSEQUENCES, in August of 2011. CONSEQUENCES became a bestselling series with five novels and two companions released from 2011 through 2015. The compelling and epic story of Anthony and Claire Rawlings has graced more than half a million e-readers. Aleatha released the first of her series TALES FROM THE DARK SIDE, INSIDIOUS, in the fall of 2014. These standalone thrillers continue Aleatha's twisted style with an increase in heat. In the fall of 2015, Aleatha will move head first into the world of dark romance with the release of BETRAYAL, the first of her five novel INFIDELITY series.
Aleatha is a "Published Author's Network" member of the Romance Writers of America and represented by Danielle Egan-Miller of Browne & Miller Literary Associates.