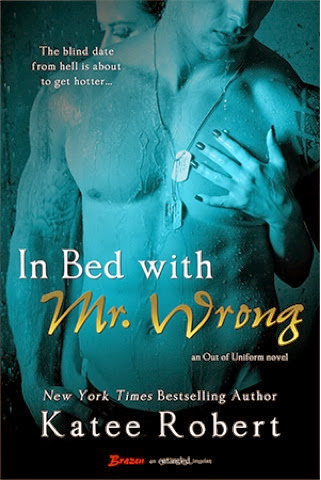 New York Times bestselling author Katee Robert kicks off her new Out of Uniform series with IN BED WITH MR. WRONG, a hilarious enemies-to-lovers story you don’t want to miss. Air Force Pararescuer Ryan Flannery avoids his hometown at all costs, so he’s not thrilled when he’s set up on a blind date—until he meets mousy librarian Brianne Nave. Her sweet curves and kissable lips are a siren’s call, but her smart mouth? Not so much. How can two people have so little chemistry outside the bedroom when they fit together so perfectly in it? When Ryan and Bri are stranded in a cabin by their friends, they’ll be forced to find out…if they don’t kill each other first. 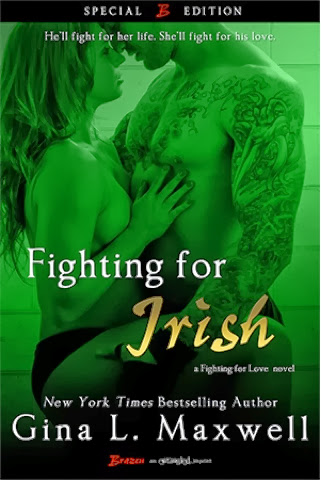 Gina L. Maxwell comes out swinging with the latest installment of her New York Times bestselling Fighting for Love series, FIGHTING FOR IRISH. When he learns a friend’s sister has forty-eight hours to make good on an ex’s debt to a crime boss, former MMA fighter Aiden "Irish" O'Brien heads to Louisiana to offer himself up as collateral. But to satisfy the debt, he has to do the one thing he swore he’d never do again: fight. With more than just money on the line, can Irish reclaim the man he once was for the woman he can't live without?
AMZ  B&N Kobo iTunes

The dynamic duo took the NYT and USA TODAY lists by storm the last time they released together, so we can't wait to see what shenanigans they have in store for 2014!

Excerpt: In Bed with Mr. Wrong by Katee Robert

“Don’t think for a second you’re getting a good-night kiss.”
“A kiss from you?” He stepped forward into her finger, forcing her to open her hand against his chest or take a step back. She refused to budge. He leaned down, crowding her. “I’d rather kiss a snake.”
“Then it’s too bad it’s winter, because they’re in short supply.” She pushed at his chest again, nearly snarling when he didn’t move. “You should just burn something else down. That might draw a few to the heat.”
“Or maybe I’ll just set fire to your goddamn granny panties. That’s sure to create a big enough blaze.”
Her jaw dropped open and she swallowed hard. “As if you could.”
“Watch me.”
He grabbed her hips and yanked her against him. Brigasped. There was so much heat in his blue eyes, it was a wonder every single article of clothing she wore didn’t go up in smoke. “You—”
But then she saw it. The challenge hidden behind the heat.He didn’t think she could handle this. Handle him.
His mouth curled into a smirk, and his hands tightened on her hips. The feel of his fingers digging into her flesh through the thin fabric of her skirt made her want to throw all caution to the wind. He thought he’d won, did he?
“Screw it.” She grabbed the lapels of his shirt and went up on her tiptoes to smash her lips against his. He froze, then stumbled backward and slammed into the wall of her screened porch, taking her with him. A wave of victory went through her. For all his talk, he hadn’t expected her to make a move. She moved one hand to the back of his neck and tipped his head down so she could set her teeth into his bottom lip.
Just like that, he came alive in her arms and pulled her tighter against him. His tongue delved into her mouth, stroking hers with no hesitation, igniting her passion until she couldn’t fight back a moan. How could one giant brute taste so decadent? She slid her tongue along his, not sure if she was searching for an answer or simply enjoying the way her very nerves seemed to spark and dance at every place they touched.
Would her whole body do that if they were naked?
Whoa. Where had that thought come from? She was proving him wrong, not jumping into bed with the man. She tried to pull away. “I think—”
“Stop talking.”

Excerpt: Fighting For Irish by Gina Maxwell
Aiden dropped his hands to her hips and stepped closer. “Will you stay tonight?” he asked softly.
“I’ll stay.”
One night. He could do that, couldn’t he? Then he could get this need for her out of his system and focus on winning the tournament to free her from any danger. His job would be done, his debt paid to Jax, and he could move back home to continue his daily penance and meaningless existence.
But right now he wanted to feel alive again, if only for a night in the arms of the woman who’d had his balls on lockdown for months. She was the reason no one else even appealed to him anymore. He needed her, just this once. But he wouldn’t do it without an understanding between them.
“Kat, can I be honest with you?” Aiden was aware of the fine line he was walking. Now he just had to do it without sounding crude or disrespectful, which would be a challenge. He was no smooth-talking Romeo.
Meeting her expectant gaze, he took a deep breath and prepared himself for the possibility of getting slapped. “Iwanna be with you tonight.”
“As in, with me with me?”
“Yeah,” he said, amusement lifting a corner of his mouth. “With you with you. It’s been a really long time since I wanted someone as much I want you.”
“Really?” she asked breathlessly.
“You sound surprised.”
She offered a weak shrug and suddenly found interest in the floorboards. “You seem like you’d be more into exciting, exotic looking women. Like one of those sexy,new-age pin-up girls with the flawless skin and beautiful tattoos.”
He almost laughed until he realized she was serious. She had no idea what she did to him. Grabbing one of her hands still resting on his shoulder, he slowly dragged it over his chest and down his stomach until they finally reached his stiff erection straining against the restrictive boxer briefs under his shorts.
Aiden groaned as he molded her hand over his cock. The feel of her gripping him nearly redefined the word “premature.” She drew in a quick breath and raised her eyes to his. Her cheeks filling with a pretty shade of pink did crazy things to his insides. The more her innocence showed through the more he wanted her.
He couldn’t make sense of it. She was right. Typically he went for the larger-than-life women who treated every day like it was their own personal thrill ride. Kat was something else entirely. Worldly beyond her years, yet somehow more innocent than she should be.
“This is how into you I am, sweetheart. Believe me when I tell you I couldn’t fake this kind of interest,” he assured her. “I want you, Kat. Wicked bad. But I don’t have anything more to offer you than one night. That’s me being honest. So if you wanna give me the red light now I’ll understand, but you gotta let me know while I still have use of some of my brain.”
“Green.”
Keep reading: AMZ  B&N Kobo iTunes