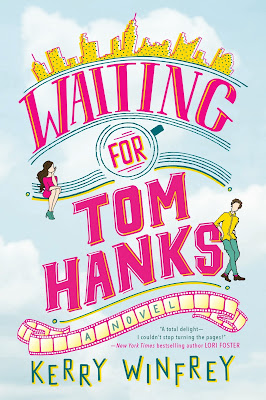 Can a romcom-obssessed romantic finally experience the meet-cute she always dreamed of or will reality never compare to fiction, in this charming debut adult novel from Kerry Winfrey.
Annie is twenty-seven years old, single, and obsessed with romantic comedies (she and her mother watched them religiously, before her mom died). Her dating life is limited by the expectations she’s formed from these movies. She is not as open to new experiences as she might be, because she’s waiting for her Tom Hanks–i.e., a guy she’ll find in the perfect, meet-cute romantic comedy way. When Annie does finally meet her perfect match, it’s not quite in the way she expected, and she’s forced to reckon with the walls she’s built around herself over the years.

ONE CLICK on AMAZON
ADD to your GOODREADS TBR 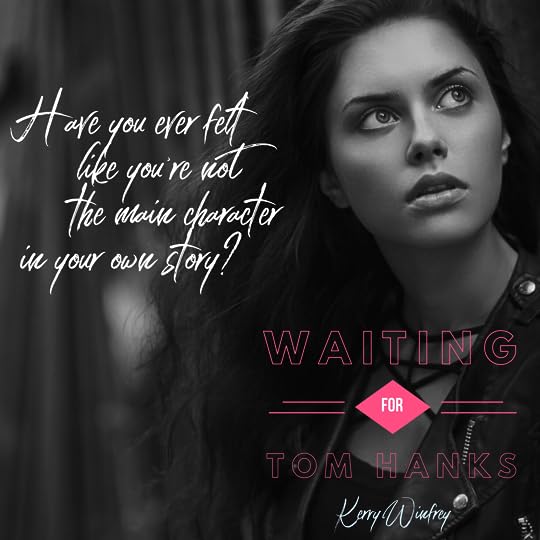 Annie is a 27 year old who lives at home with her uncle. She’s obsessed with romantic comedies and that’s probably why she’s still single. She has huge expectations for the love of her life (when he comes along). She is waiting for her Tom Hanks and it’s hard to find someone to measure up to that level of greatness.

When a filming crew comes to town, Annie gets a job as an assistant to the director. She has a meet-cute with the actor, but for some reason, she can’t see it for what it is. Annie is a bit oblivious sometimes and is still searching for that one guy (even though it’s pretty obvious he’s standing right in front of her all along).

Drew is an actor but he’s much more that that. He’s a great guy and he’s very down to earth. As a reader, I could tell he was falling for Annie. I think everyone except Annie could tell. This book was predictable for me in many ways, but that’s not necessary a bad thing. It was an easy read that I read in one day so it definitely kept my interest.

If you are a fan of rom-com movies, you will probably love this book. I like rom-coms, I do, but for some reason when I read romance I don’t want it to read like a rom-com. I want something a little more… realistic I guess? I liked the characters (especially her best friend Chloe- I’ll be reading her book! And her uncle was amazing), but the heroine irked me at times. And the last 20-30% was a little extra for me.

Overall, I did enjoy this book. The writing was great and I liked the hero and some of the secondary characters loads. If you are in the mood for a sweet and funny rom-com, I would recommend checking this one out!

"Maybe it's time you stopped waiting around for Tom Hanks to show up. Maybe this time you have to be your own Tom Hanks.”

I blink a few times, staring straight into Drew Danforth’s face. It’s like when you’re a kid and there’s a solar eclipse, and all the teachers are like, “Don’t look directly into the sun! You’ll destroy your retinas!” but there’s always that one kid (Johnny Berger, in our class) who can’t stop staring.
In this situation, I’m Johnny Berger. And I guess Drew Danforth is the sun.
“Are you okay?” he asks again, enunciating his words even more as if me understanding him is the problem. His brown eyes, I notice, are flecked with tiny bits of gold, which is something you can’t see when you watch him on TV. His hair is just as voluminous as it seems in pictures, but in person, I have the almost overwhelming urge to touch it, to reach out and pull on that one lock of hair that hangs over his forehead.
“She’s not responding.” He turns to Chloe. “Is something wrong?”
“She’s French,” Chloe says without missing a beat. “She only speaks French.”
“I’m not French,” I say, breaking my silence. Chloe and Drew’s heads swivel to look at me.
“I’m sorry about your coat,” I whisper, then I run toward Nick’s.
Chloe bursts in the door behind me, the bell jingling in her wake. “I’m not French?” she screeches. “Those are the first words you spoke to Drew Danforth? Really?”
“Well then, why did you tell him I was French?” I shout, ignoring the curious stares of everyone working on their laptops and the calming melody of whatever Nick put on to replace the Doobies.
“I don’t know!” She throws her hands in the air. “You weren’t talking, so I thought I’d give you an interesting backstory!”
I put my hands over my face. “This is ridiculous.”
“No,” Chloe says, grabbing me by the shoulders. “This is your meet-cute, and now you need to go back out there and find him and say something that isn’t a negation of your Frenchness or an apology for destroying his probably very expensive coat.”
“Meet what?”
Nick stares at us from behind the counter, a dishtowel in his hand.
“A meet-cute,” Chloe stands up straight, shoulders back, as if she’s delivering a Romantic Comedy 101 lecture to Nick and his patrons, “is the quirky, adorable, cute way the hero and heroine of a romantic comedy meet.”
Everyone stares at her blankly.
“Or hero and hero. Or heroine and heroine. Not to be heteronormative,” she clarifies.
“Like how me and Martha met at her wedding,” Gary says.
Chloe thinks about it. “I don’t know that I would necessarily call that one a meet-cute, but sure, Gary.”
“Did you just make that up?” Nick asks, arms crossed.
I shake my head. “No. It’s a thing.”
“Watch a romantic comedy, dude,” Tobin says.
Nick rolls his eyes.
“Anyway,” Chloe continues, “Annie straight up ran into Drew Danforth and spilled a cup of coffee all over his coat, which is, like, the cutest of meets.”
“That doesn’t sound very cute,” Nick says skeptically, rubbing the scruff on his chin. “Was it still hot?”
“Scalding,” I say, sinking into my chair and resting my head on the table.
“Sounds like a meet painful,” says Gary, and a few people laugh.
“Thanks,” I mutter. “I’m so glad you all find my embarrassment entertaining.”
“Annie!” Chloe sits down across from me as a customer walks in and the rest of the shop stops paying attention to us. “This isn’t embarrassing. This is merely a story I’ll tell in my toast at your wedding to Drew.”
I lift my head to look at her. “I hate to break this to you, but I don’t think he’s my Tom Hanks. I think he’s just a famous guy with a possible third-degree burn on his chest. And now my first day on set is going to be super awkward because I accidentally assaulted the lead actor with a beverage.”
Chloe’s about to say something, but then a song starts and she closes her mouth, looking up toward the speakers. “I swear to God, I told Nick not to play any more Bon Iver. It makes people look up their exes on Instagram, not buy coffee. I’m gonna go put on some Hall and Oates.”
As she walks away, I rest my head on the table again. As if it wasn’t embarrassing enough to have my uncle get me a job on set, now I have to deal with this.

Posted by Christy Baldwin at 9:00 AM