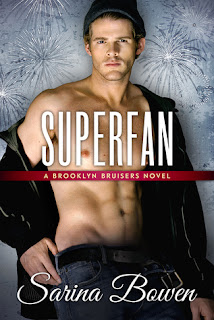 Sometimes lady luck shakes your hand, and sometimes she smacks your face. Sometimes she does both on the same day.
Three years ago I met the most amazing girl in the world. We were both down on our luck. Then I got that call—the one that tells you to get your buns on a plane to go meet your destiny.
But the girl was left behind. I didn’t have her phone number, and she didn’t know my real name.
While I became a professional hockey player, she became a superstar, with platinum records and legions of fans. And a slick, music producer boyfriend who treated her badly.
But fate wasn’t done with us yet. When Delilah turns up at a hockey game, I can’t resist making contact. The internet swoons when I ask her out on a date.
She might not remember me. But her jerkface ex does. He’ll do anything to keep us apart.
Good thing athletes never give up. This time I’m playing for keeps. 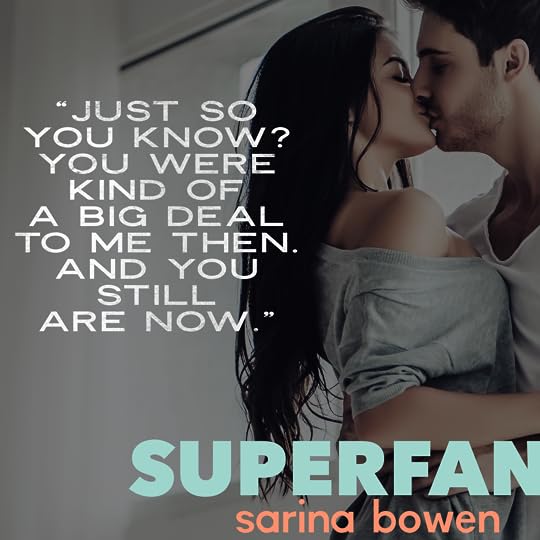 Hockey books are my favorite sports romances and Sarina Bowen writes them so well. Superfan is the third in the ‘Brooklyn’ series. It’s Silas’ book and one I’ve been waiting for.

Silas is the goalie of the Brooklyn Bruisers and he’s a fan of this specific female musician. All of his teammates know and give him a bit of crap, but what they don’t know is Silas has a history with this girl. Right before they both made it big, they met and had a thing. It’s been three years since they’ve seen each other and thanks to a Twitter interaction they have a date.

Delilah is shocked when she sees Silas again. I loved seeing into their past and watching them truly get to know each other. Silas was so sweet, romantic, and really cared for Delilah and I adored them together. Delilah has been through a lot in her life. Even though she seems to have it great now, things still aren’t easy for her. But Silas, he makes everything better.

Superfan is a sweet and steamy slow burn sports romance. I loved the friendship between the team and getting to see all my favorite characters again. Silas may be the best hero of this bunch yet. This was definitely a win!!


Posted by Christy Baldwin at 7:54 AM