CAPTURED by Jasinda and Jack Wilder 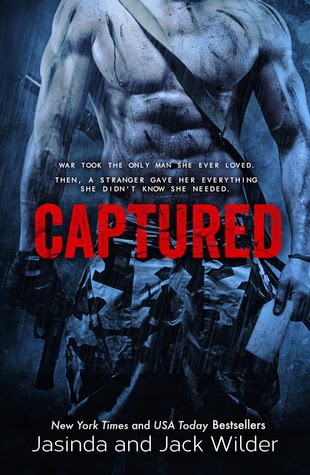 Captured by Jasinda Wilder
My rating: 5 of 5 stars

Wounded was one of my favorite books I read in 2012. It was the first book I’ve read of Jasinda Wilder’s. It also happens to be my favorite book of hers. Or it was… until I read Captured. Let it be known that I am not a huge fan of military books. I’ll read them, but I don’t seek them out. There is just something about the way Jasinda and Jack write these stories- Wounded, The Missionary, Captured- that keep me fully engaged and make me fall in love with the stories and characters. Captured was an emotional and incredible journey. It was a story of a man and woman who had both lost everything in two very different ways.

He was a solider who was once again deployed. He got captured. After most of his unit was gone- it was just him and his friend, his fellow solider. All they had to hold on to was this letter. This letter of his friends kept him sane. No matter what happens, he has the letter. And a promise he made.


Pain tells me I’m still alive, and the letter tells me why I’m holding on.

She is a widow. She always knew that was a risk. She married a Marine. It doesn’t make it any easier. Thomas was her best friend, the love of her life. She’s lost without him.


“Why didn’t you come back? You promised you’d always come back.”


Somehow, these two lost and broken characters find each other. They become exactly what the other needs. To him- she is a chance to feel again. To feel like a person, like a man.


For her, it’s the chance to feel like a woman. Like she’s wanted and desired. And maybe… just maybe there is a possibility of a second chance at love.


I had my love and he was snatched away. I’m not allowed to have another love, am I?

Both of these characters desperately needed one another. They just didn’t know it until they met. Their stories were intense. They were raw at times and not easy to read. He was broken, troubled and lost. She was just as lost… but strong and determined. It would appear that the two of them together might be a disaster, but they weren’t. They worked.

When I say that Captured is emotional, I mean it. Not just a little emotional with a few tears- I’m talking fiercely devastating at times. I cried so hard for both of these people. All they had been through all all they endured.

As emotional as Captured is, it’s equally steamy and hot. Jasinda knows how to write erotica in the best way. Putting in the perfect combination of raw emotional, heart break and passion, this was just a perfect read for me.

I know this review seems pretty vague, but I want you to be as surprised as I was about the characters and the twists and turns the story takes. Just know that it was an amazing journey and I loved it. I love to feel when I read and wow. I felt. I felt passion, I felt loss, I felt heartbreak and I felt joy. A beautiful book about two lost characters finding a second chance to live a life full of love.

Until I met you, I never thought I’d love again. Never thought I could, or eve should. but somehow, love came to me, in the form of you.

(My review will NOT contain spoilers)

Wow. That sums up Captured for me. Wow. Just when you think Jasinda and Jack's story telling ability couldn't get any better they go and write Captured. Wounded was also my favorite book by Jasinda, I don't know that I could say either one was better, I love them both equally. 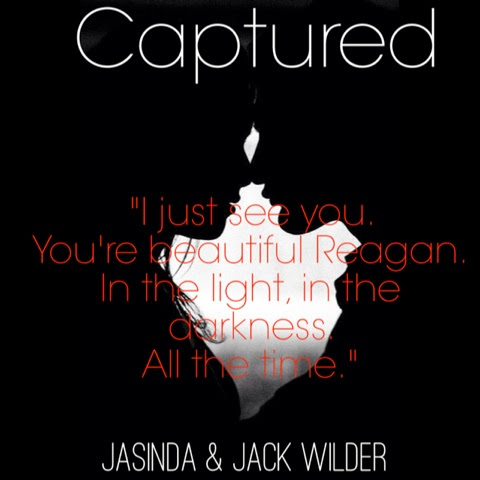 I want to take a second and share the blurb.

You go into combat, you fear death. It's what keeps you careful, keeps you alive. I've faced death more times than I can count. I've taken bullets. I've taken lives.

But nothing can prepare me for the soul-crushing terror of being captured.

I married a Marine. I knew the risks. Every time my husband shipped out, I knew there was a chance he wouldn't come back. But Thomas always did. Always. Then one day two officers in full dress uniform knocked on my door and shattered my world.

How do you keep going when you lose what made life worth living?

That blurb is so vague, so it leaves little room for a descriptive review. I don't want to spoil any of this story for anyone. This story needs the reader going in blind. 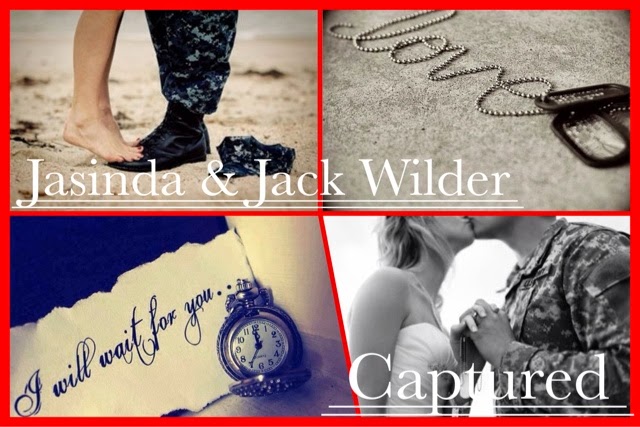 I got to 10% and cried. Then I went a little further and cried some more. The descriptions in Captured are truly amazing. I felt like I was standing beside these soldiers during combat. My skin grew cold and clammy with fear for these men. Chills erupted all over my body during most of the scenes involving the terriosts.

When I got closer to the end, I was messaging my blogging partner Christy...I had to have support. The tears were never ending by this time. But some were tears of happiness. :)

If you read Wounded and enjoyed it, then grab your copy of Captured and fall in love all over again with Jasinda and Jack's writing. And they amped up the sexiness level in Captured. Holy smokes the sex is smoking HOT!! Seriously this book blew me away! I can't wait for everyone to read this amazing book. 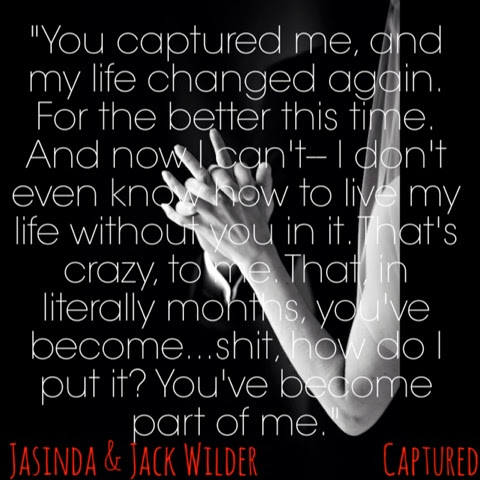 Posted by Christy Baldwin at 8:03 PM