Nothing Personal by Karina Halle is LIVE!

It's just business, nothing personal.


Until you have to work with your ex.

Nova Lane is having the worst week possible. Her latest relationship ended while on her much-needed vacation, then upon her first day back at work, she learns that her beloved boss has quit – and despite having worked so hard for it, she's not being considered for his position.


Who is being considered for the position is none other than Kessler Rocha. Her ex-coworker and ex-lover, Kessler’s the man who broke her heart five years earlier and the reason she moved thousands of miles away, switched jobs, and created numerous voodoo dolls in Kessler’s (very burly, very handsome) liking.


New in town and on her turf, Kessler promises he’s not the same man he was – and considering he’s now a single father to a precocious toddler, he’s telling the truth.


But he’s still an arrogant, devilish and dangerously intelligent man who’s taking over the position Nova feels she deserves. The fact that he’s gotten even more sexy over the years doesn’t help either.


Now Nova and Kessler have the choice to let bygones be bygones, or fight with each other every chance they get, with unresolved sexual tension only adding fuel to the flames, creating a fire that might just burn down the whole office.


In the corporate world they say it’s just business, nothing personal.


Nova and Kessler are about to show just how personal things can get. 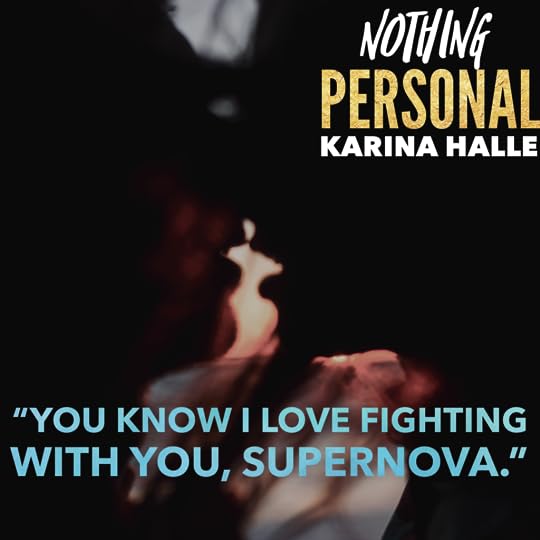 Nothing Personal is on the lighter side for Karina Halle. It’s an enemies to lovers/workplace romance/second chance romantic comedy that kept me smiling.

Nova Lane’s life is not going as planned. First, her current boyfriend cheats on her while they’re on vacation… then she comes back to work only to find that her boss up and quit and they are temporarily replacing him with her ex-boyfriend. It’s a job Nova deserves but Kessler is being brought in for it. She is not happy. Kessler broke her heart years ago and now she has to see him every day.


Kessler was the man I never quite got over. My level-ten heartbreaker. And he’s now my motherfucking boss.


Kessler Rocha is not the same man he was 5 years ago. Now he’s a single father to a toddler and his son is his priority. Still, working with Nova isn’t easy for him. He still cares for her and he knows he made a mistake all those years ago letting her go like he did. He just has to find a way to make it work. To have a job, support his child, and maybe, just maybe, get Nova back.

Nova was my favorite kind of heroine. One that’s strong, hard working, and doesn’t take any crap. I loved her personality and strength. I am a sucker for a single dad so of course I loved Kessler! His interactions with his son were amazing. And I loved how he worked to win Nova back. They bickered and bantered, but deep down you just knew they were meant to be.

If you’re looking for a book that will give you a few laughs, make you swoon, is sweet and sexy- pick up Nothing Personal.


Karina Halle is a former travel writer and music journalist and The New York Times, Wall Street Journal and USA Today Bestselling author of The Pact, Love, in English, The Artists Trilogy, Dirty Angels and over 20 other wild and romantic reads. She lives on an island off the coast of British Columbia with her husband and her rescue pup, where she drinks a lot of wine, hikes a lot of trails and devours a lot of books.


Halle is represented by the Root Literary and is both self-published and published by Simon & Schuster and Hachette in North America and in the UK.


Stay up to date with Karina by signing up for her newsletter here: https://goo.gl/Ve4eCh

Posted by Christy Baldwin at 2:27 AM

Email ThisBlogThis!Share to TwitterShare to FacebookShare to Pinterest
Labels: Halle, Live, Nothing Personal