BLURB
There’s one thing you should know.
I wasn’t that drunk.


I was more than sober enough to put a stop to it.
The truth is, it was my idea. I’m the one who suggested it.


So what’s my excuse? I liked him. I liked the idea that he’d be stuck with me, just for a little bit.


Because nothing good ever lasts, so you might as well have a good time while you can.


GOOD TIME is a standalone romantic comedy set in the same world as Good Girl.
This is Payton & Vince's story. 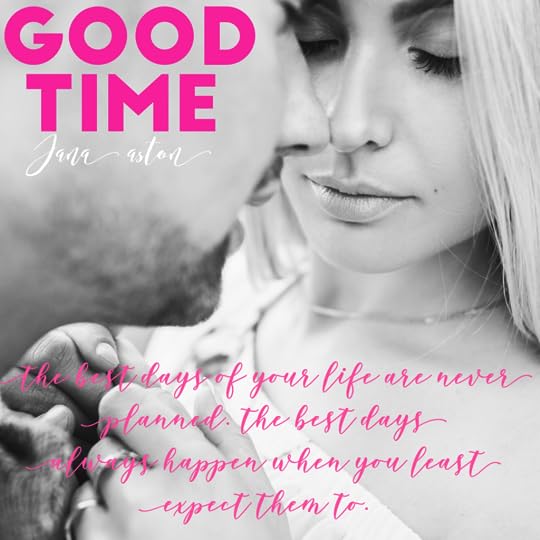 Good Time is aptly named because this book was one heck of a good time! I haven't had so much fun while reading in quite a while. Jana's books always make me laugh, but the heroine in this book was truly a hoot. She had me cracking up. Payton was truly 'legiterally'
<--you after="" br="" get="" it="" ll="" read="" you="">
If you've read Good Girl you know Payton as the crazy and impulsive best friend of Lydia who always speaks her mind, has the most random things to say, loves cheese-it's and makes her very own Trooper badges. As much as I loved Vince, Payton was the best part of this book for me. She was extra in the best way possible.

When Payton first sees Vince, it's an instant attraction. She knows he's it. He is the one she's going to marry. She just has to convince him of that. I mean, their odds can't be worse than anyone elses, right?
Fifty percent of marriages end in divorce, it’s not like people who get married on purpose know what they’re doing either.


The night that Payton and Vince tie the knot, lots of shenanigans take place. They're with Vince's friends, Canon and Lawson. I freaking loved Canon. He needs his own book asap! Anyway, once the marriage happens... what's next? That is the million dollar question.

I loved Vince and Payton together. I loved that Vince fell for Payton and loved and appreciated her exactly the way she was. It reminds me of a certain saying- 'Some people will think you're too much. Those are not your people.' Vince was most definitely one of Payton's people. I loved that Payton was always herself and never changed for anyone or anything. It's an amazing quality in a person. All of her little sayings and analogies made me smile so big.


"Loving Vince is a lot like shopping at Target.”
“Sure.” Mark nods, his face devoid of judgment because he’s an excellent work spouse. “How so exactly?”
“Well, I had no idea I needed him until I saw him. You know?”


Jana Aston delivered another fantastic rom-com with Good Time. It's hilarious, sexy, sweet, and a lot of fun! If you love romances that always make you laugh and smile, this is one you need to check out asap!


EXCERPT
He thinks I’m funny. And exasperating. And bossy. And beautiful, he said that I was beautiful.


It’s not the worst start in the history of starts, but I’d like to know more.


I pull out a stool and sit down at the island countertop so I can watch Vince work. It occurs to me once again what a shit wife I am. I don’t cook. I don’t give blow jobs. I haven’t asked if he needs anything dropped off at the dry cleaner. I don’t wear sexy lingerie. Maybe I should change? To be fair, the blow job thing is not my fault. I did offer that first night. I meant to yesterday but he distracted me with his tongue and that was that. Gah, I’m just the worst.


“What are you thinking about?”


“Yeah?” Vince responds easily, as if we’re talking about where the cutting board is. “Do you have a list of specific requirements for how you’d want that to happen?”


So he’s open to the idea, is what I’m hearing. Maybe he’ll want to date after the annulment and he’ll fall in love with me? It’ll make a great story for our grandchildren.


“I’m extremely easy-going! Everyone says so!” No one says that, actually. But it’s probably just because it’s never come up. It’s not as if I go around asking people if they think I’m easy-going, but if I did, they’d say yes. Probably. At least everyone except Vince would.


“You have a very easy-going way of getting your own way,” Vince states as he sets a pot of water on the stove to boil.


I suppose I can see where he might think that. That might even be a fair assessment.
I’m really self-aware. I need to add that to my list of positive attributes.


“No.” The answer is firm, his lips twitching like the question was amusing.


“How are you going to give me a blow job if you’re tied up?”


“What a visual you paint, Payton.”


“You’re still welcome to tie me up though. It doesn’t have to be tradesies.”


“Tradesies,” he mutters with a shake of his head, but he’s smiling as he uncorks the wine and pours two glasses.


“So, where do you see yourself in five years, Vince?” Might as well dive in with the talking.


He looks up from rolling back his shirt sleeves, a look of confusion flashing across his face replaced with an amused narrowing of his eyes.


“Excuse me? Is this an interview?” He laughs, placing a pan on my stovetop before rummaging through my cabinets for a bottle of olive oil.


“This is serious. You’ll be old and divorced. Think about that.”


“Try telling that to Britney. She’s gonna have that nineteen-hour marriage on her Wikipedia page until she dies. Wikipedia, Vince. That’s forever.”


“Do you need a wife with benefits?” I press on, because taking a step back doesn’t sound like it will get me anywhere.


“What exactly does that mean?”


“I have health insurance. Do you need health insurance? I could add you to my plan. It’s very reasonable, adding a spouse only costs like an extra two hundred dollars a month. It’s a really good plan, too. At least that’s what Lydia told me and she works in Human Resources so she would know. I’m no benefits package expert.”


“That’s not what the term ‘with benefits’ means.”


“Listen, in this case I think it’s exactly what that means. Society is the one who turned the word ‘benefit’ into something dirty.”


“So there’d be no sex in this exchange?”


“Don’t be ridiculous. Of course there’d be sex.”


“Did you just talk yourself into a circle?”

About the Author
Jana Aston likes cats, big coffee cups and books about billionaires who deflower virgins. She wrote her debut novel while fielding customer service calls about electrical bills, and she's ever grateful for the fictional gynecologist in Wrong that readers embraced so much she was able to make working in her pajamas a reality. Jana’s novels have appeared on the NYT, USA Today and Wall Street Journal bestseller lists, some multiple times. She likes multiples.

Posted by Christy Baldwin at 8:53 AM