From New York Times Bestselling author Joanna Wylde comes ROME’S CHANCE, a new novella in her Reapers MC series, brought to you by 1,001 Dark Nights! Be sure to grab your copy today!

Rome McGuire knew he was in trouble the first time he saw her.


She was sweet and pretty and just about perfect in every way. She was also too young and innocent for the Reapers Motorcycle Club. He did the right thing, and walked away.


The second time, he couldn’t resist tasting her.


Gorgeous and smart, fun and full of wonder, she jumped on his bike and would’ve followed him anywhere. Still, she deserved a shot at happiness somewhere bigger and better than a town like Hallies Falls. Walking away wasn’t so easy that time, but her family needed her and he had a job to do.


When she came around a third time, he’d had enough. Randi Whittaker had been given two chances to escape, and now it was time for Rome to take his.


This time, the only way Randi would be leaving Hallies Falls was on the back of Rome’s bike. 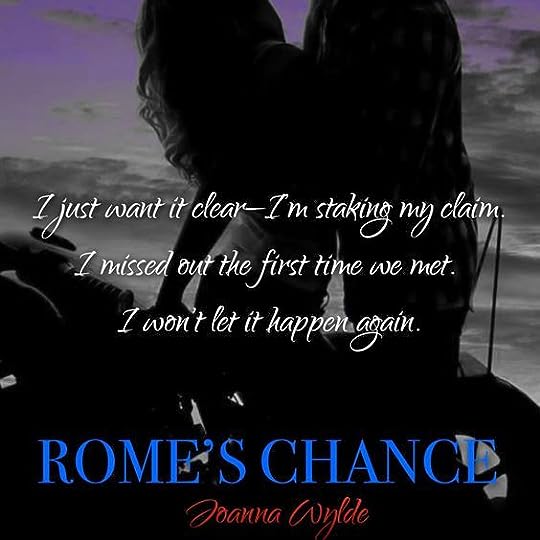 It's been a while since I've been immersed into Joanna Wylde's MC world. I was thrilled when I saw a new Reaper's book was being released, and even happier when I saw it was Rome and Randi's story. I remember shipping them in Reaper's Fire and now that they're a bit older and some time has passed, they have their own novella. YAY!

Rome McGuire had it bad the moment he first laid eyes on Randi Whittaker. At the time, Randi was too young, too innocent for a biker's world. Now she is back in Hallie's Fall for her 10 year high school reunion and things have changed for them. Now that Rome sees her back and grown up, he won't let this chance pass him by.

I loved Rome and Randi! They had such great chemistry and I adored them together. I also loved their interactions with Randi's younger sister. She was a hoot. This novella packed a lot for such a short story. It had steam, action, and also more feels than I was expecting! I recommend this to all fans of the Reaper's, it's a real treat! And for those who haven't read a Reaper's book, it can be read as a stand-alone.


Add to Your Goodreads TBR

Joanna Wylde started her writing career in journalism, working in two daily newspapers as both a reporter and editor. Her career has included many different jobs, from managing a homeless shelter to running her own freelance writing business, where she took on projects ranging from fundraising to ghostwriting for academics. During 2012 she got her first Kindle reader as a gift and discovered the indie writing revolution taking place online. Not long afterward she started cutting back her client list to work on Reaper’s Property, her breakout book. It was published in January 2013, marking the beginning of a new career writing fiction.

Joanna lives in the mountains of northern Idaho with her family.

Posted by Christy Baldwin at 9:00 AM