Review Tour: The Impossible Vastness of Us

From New York Times bestselling author Samantha Young comes a story of friendship, identity, and acceptance that will break your heart—and make it whole again. Order your copy of THE IMPOSSIBLE VASTNESS OF US today!

About THE IMPOSSIBLE VASTNESS OF US:


India Maxwell hasn’t just moved across the country—she’s plummeted to the bottom rung of the social ladder. It’s taken years to cover the mess of her home life with a veneer of popularity. Now she’s living in one of Boston’s wealthiest neighborhoods with her mom’s fiancé and his daughter, Eloise. Thanks to her soon-to-be stepsister’s clique of friends, including Eloise’s gorgeous, arrogant boyfriend Finn, India feels like the one thing she hoped never to be seen as again: trash.


But India’s not alone in struggling to control the secrets of her past. Eloise and Finn, the school’s golden couple, aren’t all they seem to be. In fact, everyone’s life is infinitely more complex than it first appears. And as India grows closer to Finn and befriends Eloise, threatening the facades that hold them together, what’s left are truths that are brutal, beautiful, and big enough to change them forever…

Amazon US Hardcover | Amazon US eBook | Barnes & Noble | iBooks US

Add to your Goodreads 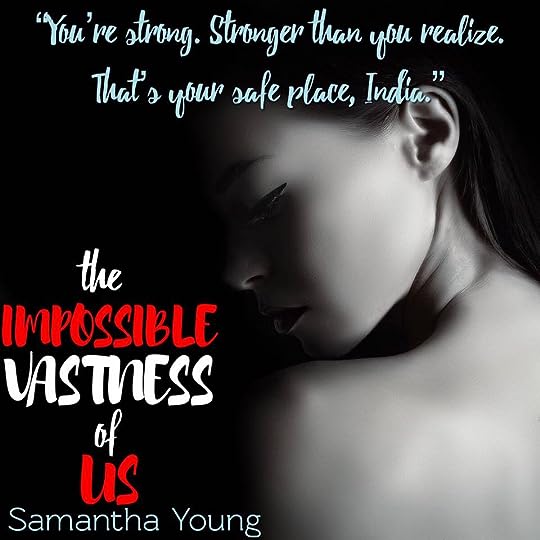 Samantha Young wrote a beautiful, emotional, and addicting YA book. It was a sweet romance, but it was more that that. It focused on growth, family and friendships. The characters were diverse and the subject matter wasn’t light and fluffy. This coming of age YA hooked me from start to finish.

India is uprooted from her friends and high school in California when her mother decides to move her across the country to Boston. India and her mother don’t have the best relationship, so when India’s mom tells her they’re moving… because she’s getting married to a rich attorney India’s never met, India is not thrilled. When she gets to Boston, she doesn’t know what to expect. The world she’s plunged into is so different than what she’s used to. She now lives in a huge house, everyone drives expensive cars, it’s truly all rich and privileged all the time.

India has a step-sister to be that is the same age as her. Fitting in with her friends is not as easy for India as her life was in California. She is the new girl, and she doesn’t fit in. There is one guy though... A guy named Finn. At first he seems broody and indifferent, but when you get to know him you see there is so much there. And even though Finn and India come from different worlds, the truth is, they get each other because of their similar circumstances. India has never had someone truly get her. Getting to know Finn is a gift.


“Most of the time I feel like I can’t breathe inside my own life. Like I’m just existing. Not with you, though. I feel like I’m breathing fresh, clean air whenever I’m with you. I feel alive.”


There is so much I want to talk about when it comes to The Impossible Vastness of Us but I feel like the story-line has so many surprises and secrets, and though some were a bit predictable to me, most were not. I don’t want to spoil this story for anyone. Go in and make your own guesses and find out these revelations on your own. Just know that you will devour this book once you start it. I know I didn’t want to put it down. It was an enthralling read.

I completely adored this book. I adored the characters, the way the story turned out, the writing, just everything about it. I hope Samantha Young decides to do more YA books, because she did an incredible job with this story.


We’d changed the course of our futures. We’d saved each other. 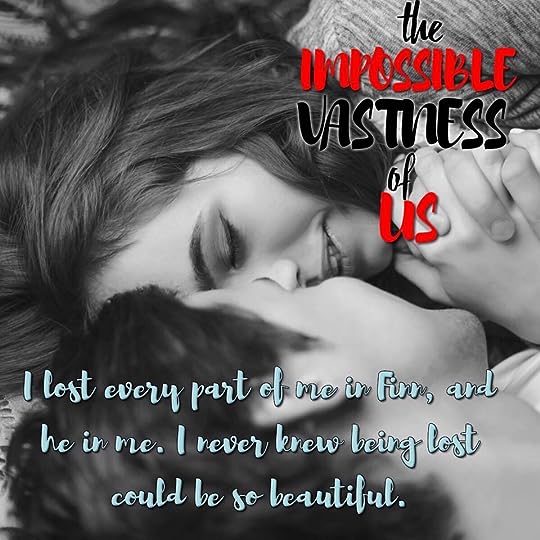 I've been on a YA binge here lately and they've all been 5 stars! It's so refreshing to read YA and get a change up on the "scenery" so to say.
When I read the blurb for this book, I was roped in. I was dying to read it. And when I started? I didn't want to stop until I was finished. I loved every single page of this book. I adored the characters and the plot was not what I was expecting.
I seriously did NOT want this story to ever end. I wanted to stay in their world longer. India and Finn and Eloise are characters that will stick with me for a long time.

Samantha Young is the New York Times,  USA Today  and Wall Street Journal bestselling author of adult contemporary romances, including the On Dublin Street series and Hero, as well as the New Adult duology Into the Deep and Out of the Shallows.  Every Little Thing, the second book in her new Hart’s Boardwalk series, will be published by Berkley in March 2017. Before turning to contemporary fiction, she wrote several young adult paranormal and fantasy series, including the amazon bestselling Tale of Lunarmorte trilogy. Samantha’s debut YA contemporary novel The Impossible Vastness of Us will be published by Harlequin TEEN in ebook& hardback June 2017

Samantha is currently published in 30 countries and is a #1 international bestselling author.

SaveSave
Posted by Christy Baldwin at 8:25 AM

Email ThisBlogThis!Share to TwitterShare to FacebookShare to Pinterest
Labels: Blog Tour, The Impossible Vastness of Us, Young