About BLUSH FOR ME:


As the take-charge wine bar manager of Seduction, Portland's hottest new restaurant, Katrina Meyers is the definition of no-nonsense, and she isn't afraid of anything. Well, almost anything: she hates to fly. When she's forced to travel on a death trap with wings, the turbulence from hell has her reaching for any safe haven—including the incredibly handsome guy sitting next to her.
Ryan "Mac" MacKenzie hasn't been able to get his sexy seatmate out of his head. The way she clung to him stirred something inside him he didn't think existed: tenderness. As the owner of a successful wine touring company, Mac thinks he's got a handle on what life can throw at him and he's not prepared for any surprises, especially in the feelings department. And when he brings a tour into Seduction, he sees the petite spitfire he just can't forget.

Mac is determined to discover what else they have in common besides fine wine and the inability to keep their hands off each other. But what will it take for two stubborn people to realize that what they have is so much more than a hot chemistry between the sheets and to admit to falling in love…? 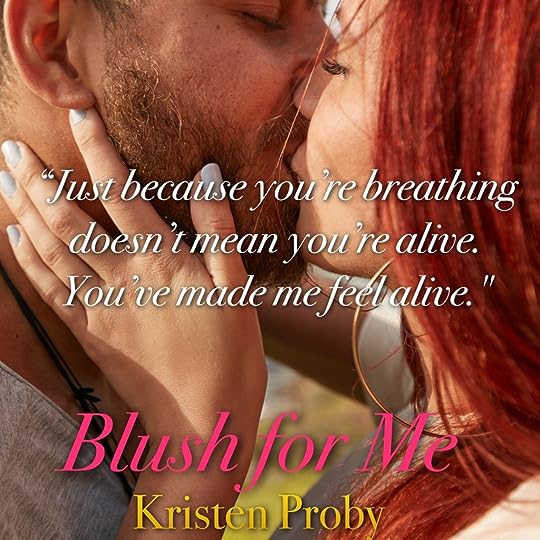 Blush for Me is the third book in Kristen Proby's Fusion series. When I'm in the mood for a fun and steamy romance, this series has really hit the spot. Ever since I met the girls at Fusion, I was excited for Kat's story. It didn't disappoint. Kat was just as fantastic as I thought she would be.

Kat is one of those women who is perfectly content being single. When she goes away on a work trip, she decides she needs a little sexcation. Vacation sex without strings. She meets Mac who fits the bill perfectly. Mac isn't one for relationships so they have the perfect set up. When Kat comes home and finds out that Mac works and lives near her, she doesn't know what to think. Kat and Mac have fun together so they figure it's no harm in having some fun and sleeping together for a little while longer... but the more time they spend together the more they start to truly like one another.

These two perpetually single people start to fall. And they don't know what to do about it. Mac and Kat together. Holy wow. This is by far the steamiest K Proby book I've read in a while. Their chemistry was explosive!!! I loved how much they had in common and how they treated one another. Mac is by far my favorite hero of this series so far. I loved how bossy and in control he was, but also how thoughtful and sweet he could be. They really made a great match. Even if they didn't know it at first.

Towards the end of the story, there was a little more suspense/family drama added in, but it wasn't too over the top and didn't take away from the story so I didn't mind. I'm not sure if Riley or Mia's book is next, but I'm really hoping it's Mia. I don't care who it's with- I'm just dying for her story! If you're looking for a book that's sweet, sexy, lighthearted, and a whole lot of fun, pick up Blush for Me! I enjoyed this one lots!

Preorder BLUSH FOR ME, fill out this form, and receive an email with the Early Excerpt from Kristen Proby’s EASY MAGIC (Book #5 in her bestselling Boudreaux Series) and an exclusive Seduction restaurant menu after Release Week!

And Don’t Miss the First Two Novels in the Fusion Series!

New York Times and USA Today Bestselling author Kristen Proby is the author of the bestselling With Me In Seattle and Love Under the Big Sky series. She has a passion for a good love story and strong, humorous characters with a strong sense of loyalty and family. Her men are the alpha type; fiercely protective and a bit bossy, and her ladies are fun, strong, and not afraid to stand up for themselves.

Kristen lives in Montana, where she enjoys coffee, chocolate and sunshine. And naps.

Posted by Christy Baldwin at 7:53 AM

Email ThisBlogThis!Share to TwitterShare to FacebookShare to Pinterest
Labels: Blog Tour, Blush For Me, Proby