Crossing Swords
By Mixie Edwards
Coming-of-age MM love story
NOW LIVE!
Available Exclusively on Amazon and KU for .99
Blurb:
Christopher Rush is not gay. But after a breakup with his longtime girlfriend, he finds himself crossing swords with his best friend Jeremy Pratt. Who’s also not … gay. It was a one-time thing. It didn’t mean anything. They like girls.At least, that’s what these boys of summer tell themselves as they pretend it wasn’t more than experimentation. With only four weeks left before they leave town for college, Christopher and Jeremy awkwardly navigate their way through a series of unfortunate (or very fortunate) events. Often leaving them breathless, conflicted, and dressed in nothing but a pair of socks. Because socks are less gay. As their time together comes to an end, will Christopher and Jeremy accept that love doesn’t discriminate, or will they put their swords up for good?
Purchase Links:
US: http://amzn.to/2jR3G8H
UK: https://www.amazon.co.uk/dp/B01N4BSQ7W 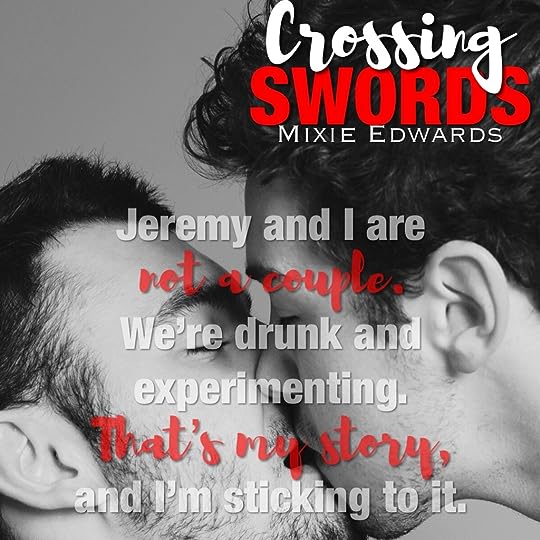 Crossing Swords is Mixie Edwards’ debut MM novel. It’s a story about two best friends getting ready to graduate from high school. One night, one of them crosses a line that has never been crossed in their friendship before… there is a lot of denial going on, but once these two are together- there is no going back.

Christopher and Jeremy are both straight guys. They both like girls. Only girls. One night, when they are both drunk and at a party, Jeremy kisses Chris. But it doesn’t stop at just a kiss… This one time thing turns into more than once, and although the boys continue to battle their sexuality and deny how they really feel, it’s apparent to the reader. Whether they’re gay, bisexual or what not- they are extremely attracted to one another. And those feelings aren’t going anywhere.

This is all wrong. It even feels wrong, but fuck, it feels good.

From the moment I read the description of this book I thought- I really want to read this one. It seemed like it would be funny- and I wasn’t let down. I thought the book was hilarious. There was so much I liked about the book. I loved both of the main characters, I loved that it made me laugh and smile, and it was super hot. I was not a fan of all the fighting and name calling between the guys- I know they are young, immature, and facing a lot of conflict and denial, so some I let slide. I also wasn’t a fan of either of their mothers.

Overall, Crossing Swords is a super steamy, laugh out loud funny, and all around entertaining read.

Posted by Christy Baldwin at 9:37 AM