The spotlight doesn’t only shine. Sometimes, it burns.
Being the bad-boy bassist for the world’s hottest band has earned Griffin Hancock some perks: a big house, a fast car, and most importantly his incredible wife Anna. The one thing it hasn’t brought him is the spotlight. Anna tells him to be patient, that his talent will win out. But Griffin is through waiting for permission to shine.

Without warning, Griffin makes a shocking decision and takes the gamble of a lifetime. Suddenly he’s caught up in a new level of lights, cameras, and chaos—one that pushes his relationship with Anna to its limits. Anna has always found his unpredictable behavior sexy, but lately he’s seen an ache in her eyes, and it has his soul in knots. Just as the recognition Griffin seeks is finally within reach, the thing he loves most in life could be slipping through his fingers… 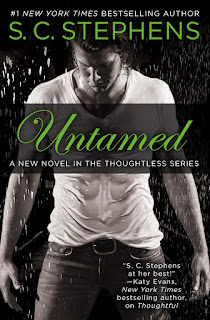 S.C. Stephen's is one of those authors who writes angst, romance, humor and steam all in one perfect package. And that package is the Thoughtless series. Untamed is book #5 and it's Griffin's story. Griffin is the bass player of the D-Bags. He's the guy that's always wiling and ready to give comic relief to the book. Although he is a funny character, this story wasn't all laughs. It had moments that were funny of course, but it also had some serous parts.

Highlights of this story: Anna and Griffin's relationship. I love this couple! Griffin's growth. I was so impressed with how much he changed and grew as a character. And KELLAN KYLE. Because come on, any book with Kellan Kyle and he is a highlight. He's a #1 book boyfriend for me and most readers I know!

All fan's of Stephen's Thoughtless series should pick up this well written, funny and fantastic story of this larger than life character, Griffin "The Hulk" Hancock!

Book Babes was lucky enough to get an interview with the fantastic S.C. Stephens!

1. What was hardest about writing the story from Griffin’s perspective?
The hardest part of writing Griffin’s book was deciding what part of his life to focus on, and what journey to take him on. The possibilities were endless, and sometimes that was really overwhelming. What was the most fun? Griffin’s inner monologue was the best part for me! The things he says are hilarious, but what he doesn’t say is even better.

2. In the book, Griffin takes a chance and tries out a new career. If you could do anything else besides writing, what would it be?
Writing was the dream career for me, so I don’t know of anything I would give this up for. As long as I’m able to keep dreaming up stories, this is what I want to do.

3. Who has influenced you as a writer?
I have learned so much from the writers I admire. Colleen Hoover’s storytelling gift. Tammara Webber’s compelling characters. A.L. Jackson’s descriptive poetry. Christina Lauren’s sexy scenes. Alice Clayton’s and Tara Sivec’s humor. K.A. Linde’s ability to bleed your heart dry. Every book I pick up motivates me to do better. 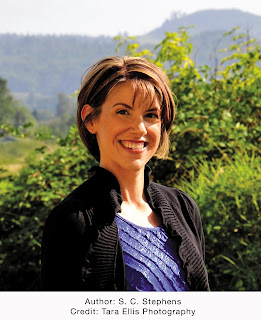 About the author:
S.C. Stephens is a #1 bestselling author who spends her every free moment creating stories that are packed with emotion and heavy on romance. In addition to writing, she enjoys spending lazy afternoons in the sun reading, listening to music, watching movies, and spending time with her friends and family. She and her two children reside in the Pacific Northwest.

Posted by Christy Baldwin at 10:11 AM