Synopsis
When Sawyer Reed wants something, he gets it.
And I WANT her.
She doesn’t know it yet, but she’s already mine.
Her resistance is futile because once I start a play, I always follow through. And I ALWAYS win.
Nothing, not even the deep-seated hate I have for my rival, Jacob Byrd, is going to keep me from my end game.
And my end game is Gretchen Cole.
But I have to keep my head in the game. Everyone knows what happens to a quarterback when he loses focus. He gets SACKED. 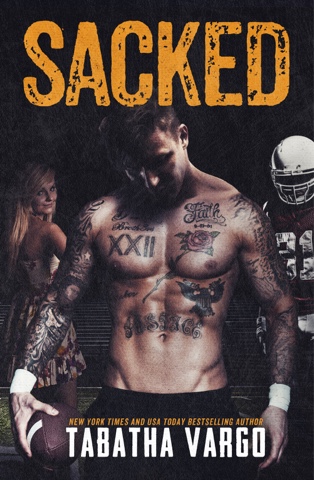 Excerpt
Pulling away, he looked down at me, a sexy grin on his face. “You’re so fucking sweet, baby,” he whispered. “I bet you taste sweet, too.”
I moaned loudly as he slipped his finger inside the lace covering me and swiped it softly across my throbbing center. Before I could really begin to enjoy it, he pulled his glistening finger out and sucked it between his lips. Seeing him taste my juices turned me on in a way I never imagined and the throbbing intensified.
“Mmmm. Honeysuckle.” He closed his eyes and sucked once more at his finger.
I moved to lean into him, but before I could, he dropped to his knees in front of me. His hands moved up my outer thighs, taking my dress with it, and then he was peeling my boy shorts off. Cold air rushed over my soaked folds as he shuffled them down my thighs to my knees and over my boots. And when I lifted my foot to help him take them off, he smiled to himself.
This was really happening, and I wasn’t sure I could stop it even if I wanted to. I was too far gone. I don’t know if it was the last few weeks of mental foreplay or the alcohol I’d consumed, but the second he slipped his hot tongue between my folds and sucked me, I didn’t care what happened. I only knew he was soothing the throbbing ache.
“Sawyer,” I whispered as my head fell back against the door with a thump. “Ah, God.”
I’d never let anyone in my personal space this way, but damn if I could stop him. The sensations that spread through me as he feasted on my sensitive flesh were beyond amazing. I found myself whining like a little bitch and begging with my moans for him to keep going.
My fingers moved into his hair, holding him to my body. Lifting my leg onto his shoulder, he opened me to him as he continuously licked and sucked, sending my body into a frenzied state.
“Yes. Oh my God, Sawyer, yes. What are you doing to me? I can’t …”
He didn’t answer.
Instead, he pushed a single finger into me and slowly began to work it in and out. My knees began to shake, the door the only thing holding me up, and I panted as the sensation of release slowly began to move over me.
Sliding a second finger into me, he worked back and forth and in and out. His tongue twirling my hardened nub before softly sucking, and I was done.
I exploded. 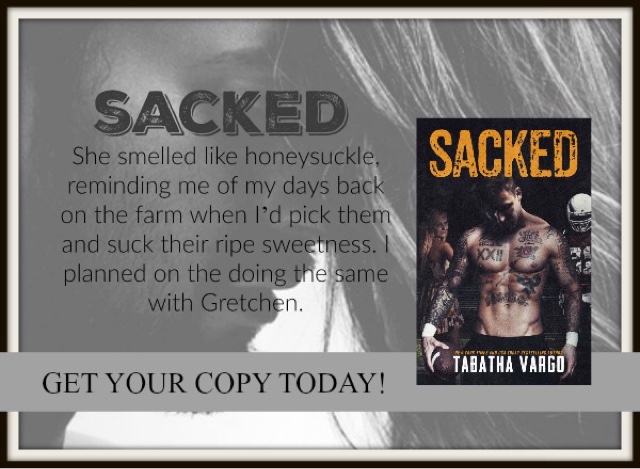 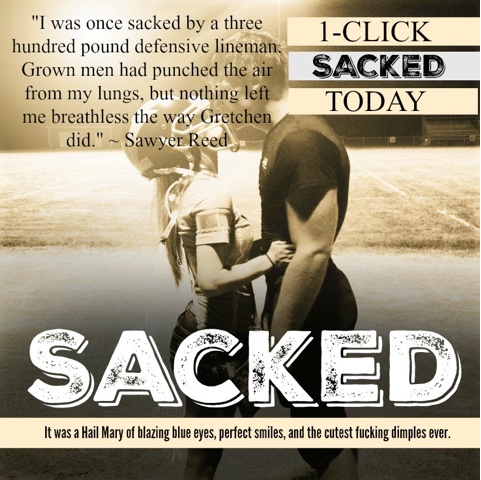 Tabatha Vargo is a New York Times and USA TODAY bestselling author, but mostly she's a boring control freak with a severe case of OCD and ADD. Oh look, something shiny. She's a South Carolina girl who loves historical anything, wind chimes, and all things romantic and smutty. She's the mother of a 10 y/o tomboy and the wife of her very own Prince Charming.
When she isn't writing, she's texting book ideas to herself, hanging out with her family and friends, or reading.

I devoured this one! I couldn't stop reading once I started that first page. I didn't know what to expect when I read the title and blurb, because a book was released prior to this one with the same title, and similar blurb. But once I started reading, it was CLEAR that these were two totally different books.

Sawyer plays football, and he plays well. So well he knows he's going somewhere and it isn't hard to find girls. But he's on a strike out streak with the ladies. Between practice and doing his school work he barely has time to get the girls off after they suck him off. And he begins to get frustrated with just getting BJ's. And then one day while getting to class late he notices a girl across from him and she does something he doesn't expect from a girl. She makes funny faces and him and causes him to laugh out loud in class. He decides he needs this chick something fierce.

Gretchen catches his attention on purpose, but not why you think. She has a ulterior motive behind her interest. So she puts Sawyer in the friend zone. But once she starts to know the real Sawyer she begins to realize she is in real trouble here.  So at this point it's a battle of will on her part and a battle of make her see reason on his part. Who wins? You have to read it to find out! Hehe

Okay so my thoughts on Sacked are it's absolutely brilliant. I even cried on some very emotional parts. It has the perfect blend of sexy and humor. My favorite line is "It was the epic cock. I was drugged by the dick." I laughed out loud with that line!! Sacked is my first Tabatha Vargo book, and I've decided it won't be my last. Her writing is fantastic. Her ability to draw the reader in and feel like you are part of the story is amazing. Kudos to Tabatha on this beautiful story.
Posted by Reanell_lynn at 10:50 AM