The Song of David by @aharmon_author audio book is now available!!!!

The Song of David 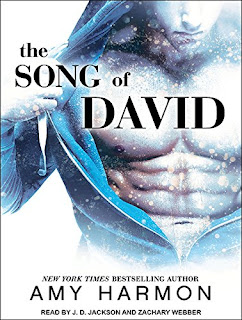 Narrated by J.D. Jackson and Zachary Webber
Important info: readers who already own the Kindle edition of this book, can add the audio narration for just $2.99 instead of $26.59.
Blurb
** This book is a STANDALONE novel featuring characters that were introduced in The Law of Moses. It is not a sequel, but it is a spin-off, and it is recommended that The Law of Moses be read first.**

I won my first fight when I was eleven years old, and I’ve been throwing punches ever since. Fighting is the purest, truest, most elemental thing there is. Some people describe heaven as a sea of unending white. Where choirs sing and loved ones await. But for me, heaven was something else. It sounded like the bell at the beginning of a round, it tasted like adrenaline, it burned like sweat in my eyes and fire in my belly. It looked like the blur of screaming crowds and an opponent who wanted my blood.

For me, heaven was the octagon.

Until I met Millie, and heaven became something different. I became something different. I knew I loved her when I watched her stand perfectly still in the middle of a crowded room, people swarming, buzzing, slipping around her, her straight dancer’s posture unyielding, her chin high, her hands loose at her sides. No one seemed to see her at all, except for the few who squeezed past her, tossing exasperated looks at her unsmiling face. When they realized she wasn’t normal, they hurried away. Why was it that no one saw her, yet she was the first thing I saw?

If heaven was the octagon, then she was my angel at the center of it all, the girl with the power to take me down and lift me up again. The girl I wanted to fight for, the girl I wanted to claim. The girl who taught me that sometimes the biggest heroes go unsung and the most important battles are the ones we don’t think we can win.


Kobo - https://store.kobobooks.com/en-US/ebook/the-song-of-david
Posted by Christy Baldwin at 9:30 AM