The Girl I was Before by Ginger Scott- teaser! @thegingerscott @wordsmithpublic 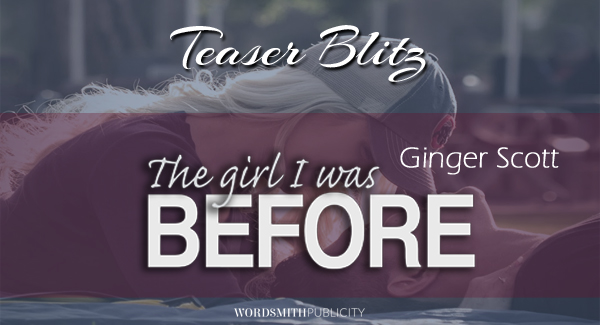 BLURB:
I’m the selfish one. I suppose that’s the nicest thing people say about me. I’ve heard the other things, too. “Paige Owens is a pretty girl with nothing else to offer. She’s just a good time at a party. She’s stupid, heartless, cold and useless. All she cares about is getting a guy to look at her. Why would anyone want to be her friend?”

Some of those things are true. Others were true. They’re all hurtful.

None of it matters.

I’m ready to become the girl Houston Orr sees when he looks at me.

Houston isn’t a star athlete. He doesn’t play in a band. He’s never going to be president, and his life is so far away from simple and easy it isn’t even funny. He wasn’t part of my plan. But I’m starting to think plans are overrated, and maybe our stories are what we make them. And mine depends entirely on me, and the choices I make…starting now.

Houston is my fairytale. He’s perfectly imperfect. He’s poetry and life. He’s truth and heartbreak, all rolled up in a tall body with dark hair, broad shoulders and green eyes that lull me into submission. He’s nothing I ever thought I wanted, but the very thing I need. He’s the only guy I’ve ever really loved, and he thinks I’m a princess. I fell into him, and now I’m holding on.

But sometimes life takes away our ability to choose. Sometimes…things aren’t in your control. Sometimes, it hurts to be selfless. My only hope is that when it comes time to choose, I get it right.

Welcome to my once upon a time and wish for happily ever after.

About the Author:
Ginger Scott is an Amazon-bestselling author of eight young and new adult romances, including Waiting on the Sidelines, Going Long, Blindness, How We Deal With Gravity, This Is Falling, You and Everything After, Wild Reckless and The Girl I Was Before.

A sucker for a good romance, Ginger’s other passion is sports, and she
often blends the two in her stories. (She’s also a sucker for a hot
quarterback, catcher, pitcher, point guard…the list goes on.) Ginger has
been writing and editing for newspapers, magazines and blogs for more than 15 years. She has told the stories of Olympians, politicians, actors,
scientists, cowboys, criminals and towns. For more on her and her work,
visit her website at http://www.littlemisswrite.com.

When she's not writing, the odds are high that she's somewhere near a
baseball diamond, either watching her son field pop flies like Bryce
Harper or cheering on her favorite baseball team, the Arizona
Diamondbacks. Ginger lives in Arizona and is married to her college
sweetheart whom she met at ASU (fork 'em, Devils).