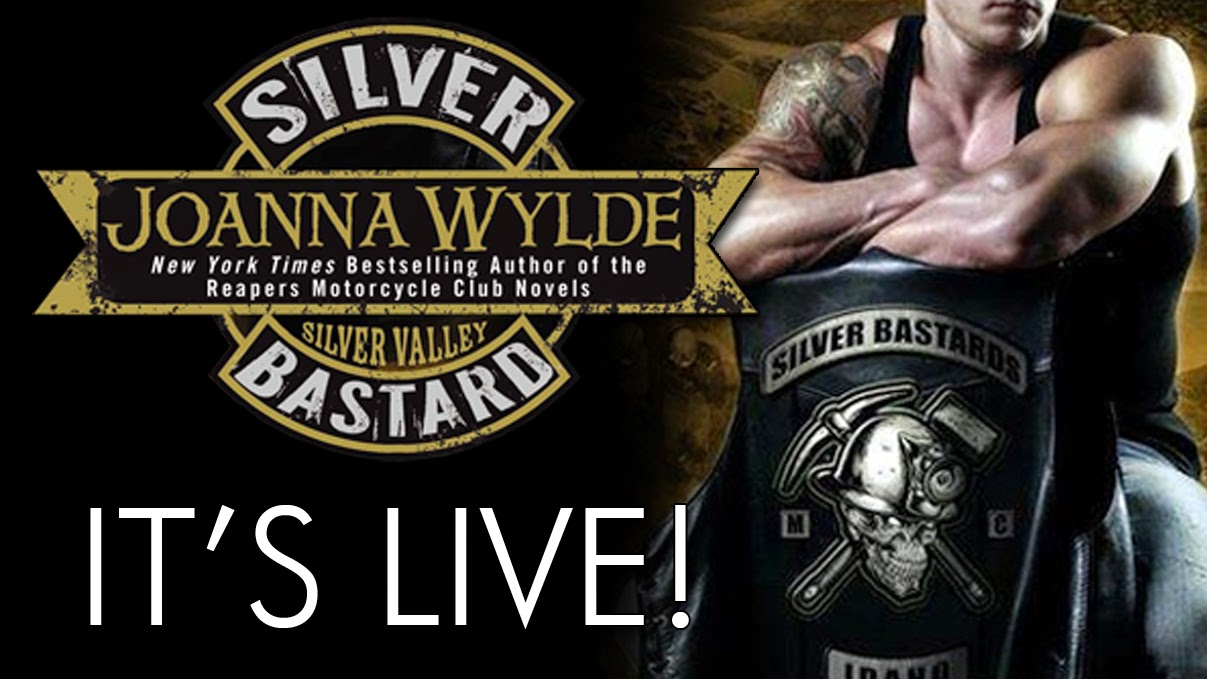 Fourteen months. For fourteen months, Puck Redhouse sat in a cell and kept his mouth shut, protecting the Silver Bastards MC from their enemies. Then he was free and it was time for his reward--full membership in the club, along with a party to celebrate. That's when he saw Becca Jones for the first time and set everything in motion. Before the night ended he'd violated his parole and stolen her away from everything she knew.

Five years. It was five years ago that Puck destroyed Becca and saved her all in one night. She's been terrified of him ever since, but she's even more terrified of the monsters he still protects her from... But Becca refuses to let fear control her. She's living her life and moving forward, until she gets a phone call from the past she can't ignore. She has to go back, and there's only one man she can trust to go with her--the ex-con biker who rescued her once before.

Puck will help her again, but this time it'll be on his terms. No more lies, no more tears, and no more holding back what he really wants...

I’ve been insanely excited to read Puck’s book ever since I met him. Even though this is the start of a new series, it spins off from the end of the last Joanna Wylde book.  I love MC books, but Joanna’s MC books are special MC books. They are consistently good. They’re the perfect amount of raw/grittiness without going over the top. They’re sweet and sexy without being too soft. And they always have great alpha heroes, strong heroines and a solid story. Silver Bastard was no exception.

Puck is just out of jail and a full fledged Silver Bastard. Life is good. At a party to celebrate his release, he sees the young and beautiful Becca Jones. Becca is the girl he has his eye on. She’s different from all the other girls there and he wants her. They have an incredible night, only to wake up and realize that Becca’s circumstances aren’t what he thought. Puck saves her and himself that day. And Becca has always been grateful for that. She decides to take this new start and make sure her life is different from the one she knew growing up.

Fast forward five years later. Becca is living in the same town as Puck, but they haven’t spoken much as the years have went by. Becca’s been safe, been in school and working. Puck is doing what he does as a member of the SB’s. They’ve never forgotten each other. And they've had some events happen that led them to… reconnect. Becca has always seen Puck as special. As someone who’s saved her. Even though Puck doesn’t feel deserving of a girl like Becca, Becca knows he’s something else. He did something he didn't’ have to do and it changed her life forever.

I thought Becca was such a strong heroine. She was self sufficient. Proud. Strong. I loved this chick. She works hard, provides for herself and doesn't take crap from anyone. Puck was your typical biker in some ways. He was that bad ass biker who was alpha and domineering, but also had a soft spot for his woman. Once he claimed Becca as his, it was over.

The spark and the chemistry between these two is off the charts hot from the beginning.  No matter how hard they try to fight it, it’s palpable. And once they give in… it’s explosive.

Becca and Puck don’t have an easy start to their story. It’s got a lot of bumps and bruises along the way. It’s complicated. But Puck’s loyalty to Becca makes all the difference.

There is, with every Wylde book, that moment towards the end where the shit hits the fan. You know what I’m talking about. This book had it. It broke my heart a little more than normal. I felt for Becca. It hurts to think someone who is supposed to love you could do you that way. But I was so glad that she had the closure she needed. And I’m glad she had Puck to support her and be there for her when she needed him. Becca, more than most, needs someone in her life that she can count on. And for once, she has that.

Overall, this book was another fantastic addition to Joanna’s MC books. The ending was all kinds of perfect. I love the Reaper’s so much, and the Silver Bastard’s are shaping up to be just as great. Action packed, suspenseful, super steamy and completely enjoyable, Silver Bastard is one book you won’t want to pass up! It gets a full 5 stars from me!

Excerpt
“What the fuck happened out here?” Danielle asked, her arm suddenly around my shoulders. I immediately felt better. Danielle and I balanced each other out perfectly—she was batshit crazy and insanely optimistic. Make that dangerously, recklessly optimistic.  As for me, I spent nearly all my time focused on staying sane and getting ahead. That didn’t leave much time for things like actually living my life.

We’d met each other our senior year of high school, when she’d offered to drive me back and forth to town in her shiny new Jeep Wrangler. This spared me from the horror of sharing a battered school bus with every hormonal teen living in the greater Callup  metropolitan area. After a particularly harrowing ride home in her car one night (long story short, it took us six hours to travel thirty miles and by the time we pulled into town, we had matching tattoos of chipmunks wearing scarves) I decided it was my job to keep her from accidentally killing herself.

In return, she pushed me to do fun things, reminding me at least once a week that I was only twenty-one and perhaps the fate of the universe didn’t literally rest on whether or not I balanced my checkbook to the penny. Along the way, she taught me how to do smoky eye makeup, how not to freak out when a guy asked me to dance, and how to “borrow” music off the Internet. (When I pointed out that “borrowing” music was stealing, she agreed and started using iTunes for her downloads. To finance this, she “borrowed” her dad’s credit card.)

“Well, apparently me and Blake no longer work here,” I said, leaning my head against her. “I don’t know if you’re fired or not.”

“You weren’t even part of it,” I protested.

“I don’t care. You’re a much better waitress than I am. If she fired you, no way I’d last there anyway. Let’s go get drunk!” 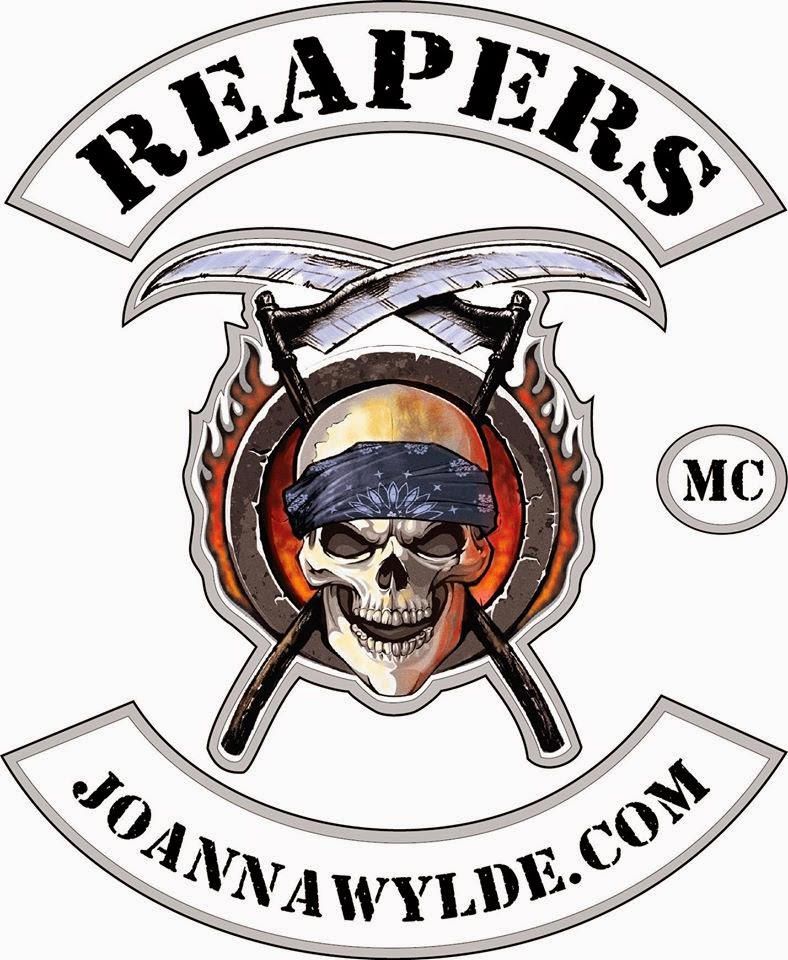 Joanna Wylde is a New York Times bestselling author and creator of the Reapers Motorcycle Club series. She currently lives in Idaho.

a Rafflecopter giveaway
Posted by Christy Baldwin at 9:46 AM