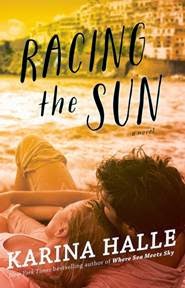 RACING THE SUN by Karina Halle
ON SALE 7/28

From the New York Times and USA TODAY bestselling author of Where Sea Meets Sky comes a new adult novel about a young woman who becomes a nanny in Capri and falls for her charges’ bad-boy brother.

When I’m traveling, I feel like the secret to my life, to myself, to really becoming, is one step ahead. It’s in the next destination, the next town I get lost in, the next stranger I talk to. It’s always next but never here . . .

After six months of backpacking and soul-searching across the world, Amber MacLean is flat broke. There are worse places for a twentysomething to be stuck than the Amalfi Coast, but the only way she can earn enough money for a plane ticket home to California is to teach English to two of the brattiest children she has ever met.

It doesn’t help that the children are under the care of their brooding older brother, ex-motorcycle racer Desiderio Larosa. Darkly handsome and oh-so-mysterious, the young master of the crumbling villa tests Amber’s patience and will at every turn—not to mention her hormones.

When her position turns into a full-time nanny gig, Amber grows dangerously closer to the enigmatic recluse. But can she give up the certainty of home for someone whose closely guarded heart feels a world apart from her own?

Karina Halle is the New York Times bestselling author of Where Sea Meets Sky, The Pact, Love in English, and other wild and romantic reads. A former travel writer and music journalist, she lives on an island off the coast of British Columbia with her husband and her rescue pup, where she drinks a lot of wine, hikes a lot of trails, and devours a lot of books.
RACING THE SUN by Karina Halle

I quickly take the notice off of the board before anyone else notices. Like hell I’m going to compete for this job. Even though I’m not really sure what it entails, other than possibly teaching English to two kids, or what it pays or if it includes room and board, I’m not going to give the opportunity up. If it doesn’t work out, then I’ll just put the ad back.
I immediately connect to the cafe’s Wi-Fi on my cell phone and shoot an email off to Felisa. I make myself sound as good as possible: Graduated from college with an English degree. Worked as a receptionist for a prestigious company (before I was fired). Great with children (I think I baby sat once when I was fifteen). Willing to work in Capri, provided help with housing is included. Have spent a great deal of time building up life skills while traversing Southeast Asia. Knows how to bake a mean tiramisu.
That last part is a lie but I thought they might find it endearing.
I press send and then wait.
And wait.
And when I realize I’m not going to get a response right away, I head to the bar next door, taking the work notice with me.

Posted by Christy Baldwin at 2:59 PM