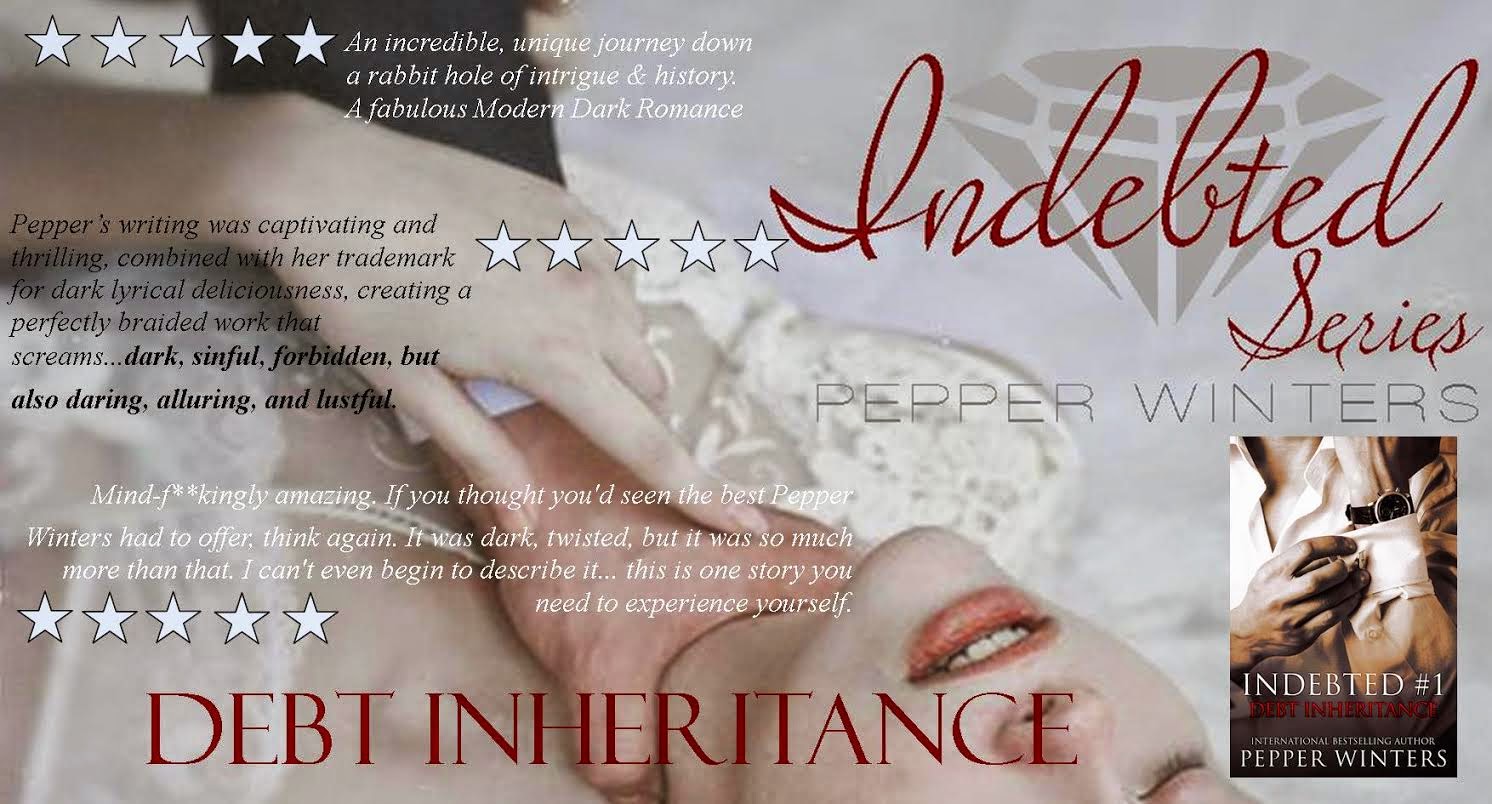 Debt Inheritance by Pepper Winters
My rating: 5 of 5 stars
5 Dark and Sinful stars!!!

As a reader, I love the dark and twisted reads. I can’t get enough of the ones that make my heart race and keep me on the edge of my seat. It is most certainly one of my genres of choice. More often than not, books are classified as ‘dark’ but still have some sweet, some romance, some happy. I can state with absolute certainty that Debt Inheritance isn’t one of those books. It’s dark, gritty and erotic, but not in a sweet way. In a dark and sexy way. Pepper Winters is one of the few authors I’ve read that can pull off dark and raw flawlessly. Once you meet Jethro Hawk, you’ll know exactly what I mean.

Jethro is a Hawk, and that means something. His family is influential in many ways. Now that he’s twenty nine, he gets the family inheritance. He gets to collect the woman who’s family has had a long standing debt to his.

There was a debt to be paid. And I was the method of extraction. Plain and simple. I’m a Hawk. She’s a Weaver. That was all I needed to know.

Nila Weaver isn’t your average twenty four year old woman. She’s a fashion designer, and after living a fairly sheltered life, the only people she’s close with are her brother and father. She lives her life cautiously. She works hard, lives up to all the expectations placed on her, and doesn’t date. Besides her family, she keeps to herself. When she meets Jethro Hawk- everything changes.

It is so refreshing to find an anti-hero that is more of a villain than anything else. Maybe it’s just me, but I love when my heroes have more dark than light. I’m not sure if there is anything redeemable there with Jethro, but I’m dying to find out! Cold, cunning, calculating- he was, quite frankly a little terrifying, yet very alluring. Ruthless and yummy- I have to say I’m fascinated by this man.

Let her believe her tears affected me, opening my arms and offering false humanity. I let her believe I had a soul, and didn’t punish her for hoping. Hoping I was redeemable. Such a silly girl. A silly toy. She’d been given to me to do as I pleased. And everyone knows, you don’t give a pet to a killer.

Nila is a shy girl at first, a little peculiar… but damn! Does she come out of her shell. She is a little firecracker underneath it all. A strong woman who isn’t going to just lie down and take it. She’s a fighter and is tougher than she seems. Going through all this really forces her to come into herself, stand up for herself and show that fierce strength she’s always had lurking inside.

Debt Inherence was extremely fast paced, thrilling, wickedly sexy and bold. This author always goes out of the box and gives us original twisted and captivating tales. Is there a cliffhanger- of course there is. It’s a dark trilogy. You know the ending is going to leave you hanging and craving more. And once you finish, you will want so much more.

I devoured this book. It is a unique story full of secrets and suspense.  There were so many things I was questioning that came to light by the end, but I still have so much more I need to know. I will be highly anticipating the next installment of this deliciously dark series.

I truly was Cinderella, only my prince threw away the glass slipper and stole me away before midnight struck. My prince was evil. My prince was a villain.


Posted by Christy Baldwin at 9:29 AM