If Only by AJ Pine

March may be almost over but that doesn’t mean the fun is over at Embrace.  We are excited to be announcing the release of Amy Pine’s, If Only, which readers are already raving about!  Plus you can pick up If Only on sale for just $.99 right now. 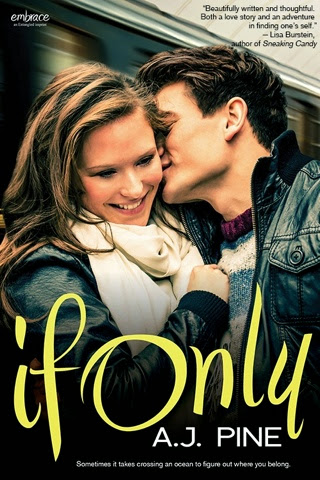 Sometimes it takes crossing an ocean to figure out where you belong.

It's been two years since twenty-year-old Jordan had a boyfriend—which means it's been forever since she, well, you know. But now she’s off to spend her junior year in Aberdeen, Scotland, the perfect place to stop waiting for Mr. Right and just enjoy Mr. Right Now.

Sexy, sweet (and possible player) Griffin may be her perfect, no-strings-attached match. He’s fun, gorgeous, and makes her laugh. So why can’t she stop thinking about Noah who, minutes after being trapped together outside the train’s loo, kisses Jordan like she’s never been kissed before? Never mind his impossible blue eyes, his weathered, annotated copy of The Great Gatsby (total English-major porn)…oh, and his girlfriend.

Jordan knows everything this year has an expiration date. Aberdeen is supposed to be about fun rather than waiting for life to happen. But E. M. Forster, Shakespeare, and mistletoe on Valentine’s Day make her reconsider what love is and how far she’s willing to go for the right guy.
Find If Only Online:

This was my first book that I've read by AJ Pine and it won't be the last. I love her writing style, and the way she can write out these amazing characters.

We meet Jordan while she's on a train traveling to Aberdeen University. While on the train, she meets Griffin, who happens to sit down beside her and starts up a conversation. She learns that Griffin is a man-whore. But he's the worst kind of man- whore, he has a heart. He tells her he isn't Mr. Right, he's Mr. Right now.

Jordan runs off to the loo, and after arriving she finds it occupied. She is standing outside the door when it opens and the occupant lands in her face. After the mishap, she comes back out of the loo to find that same boy just outside the door. It seems as though the doors to get back in the train car to their seats are jammed.

After he starts to have a panic attack she starts up a conversation and they realize they have a strong reaction to each other. Noah and Jordan hit it off while being stuck in that cubby area, and share a life-altering kids. Then Noah gets a text message on his phone and the spell is broken.

Jordan goes back to her seat with Griffin. They decide since they already know each other, they should do the tour together the next day. Once they arrive Jordan comes face to face with Noah, and his girlfriend. Yep....you saw that right girlfriend. Jordan and Griffin start a relationship, one that is easy and no commitments, just go with the flow type relationship.

Noah confuses Jordan, he seems to want her and tries to explain his situation with her but Jordan doesn't want to hear it. She is hurt that the kiss meant something to her and it didn't him. We learn quickly that things are not always what they seem.

They both do stupid things to hurt each other, but they can't seem to stay away.

I am so glad I decided to join this review tour. This book touched everything I Love in a book. It had romance, angst, the sexy book boyfriends, and a heroine who I liked. Grab this one babes! You won't be sorry that you did!

a Rafflecopter giveaway
Posted by Reanell_lynn at 6:20 AM